It’s just, it’s been a while since someone’s been horribly killed, and it seems like an opportune time for someone to be… well… offed.

Jarv’s Rating: 1 Chang. This is a film that should be right up my alley. It’s got monsters and gore and should, therefore, be something that I love. Unfortunately, it’s nowhere near as clever as it thinks it is, and it is just so amazingly mean-spirited, juvenile and “ironic” that it leaves a deeply unpleasant taste in the mouth. This is not fun.

One of the worst developments of the 21st Century was the rise of the “talent” show. It started in the UK with the execrable Pop Stars, which morphed into Pop Idol, then the X-factor, and inflicted such musical noteworthy types as Hear’Say,  Gareth G-G-G-Gates (yes, I am being rude about someone with a stutter), Girls Aloud and Leona Lewis on us. Thankfully most of the “acts” produced by them tend to sink without trace. America, however, being America does the same crap on a much bigger scale. Not only is American Idol still up and running, but they also applied the same formula to other sections of the arts- including cinema. In this case, Project Greenlight was a series designed to give wannabe writers and directors a shot at the big time. Feast was the winner of the third series.

As is traditional for the winner of these talent show series, the winner isn’t actually very good. John Gulager directs Marcus Dunstan and Patrick Nelson’s script which is a heavily ironic take on the monster movie starring Balthazar Getty, Navi Rawat, Krista Allen, Josh Zuckerman and features a cameo from Jason Mewes. Basically, it tells the story of a group of stereotypes trapped in a bar trying to fend off disgusting, intelligent, ravenous beasts. Eventually our survivors manage to fend off the beasts leaving a handful to drive off into the sunset. That’s all there is in the way of plot: Feast is, I suppose, a survival horror film. 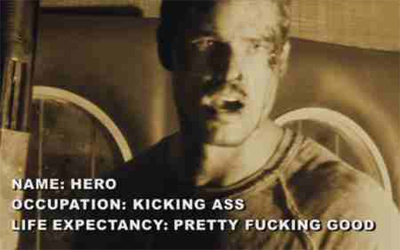 Postmodernism FOR THE FAIL

As a survival horror film, this depends heavily on the characters. Do we root for them, do we like them, and do we want them to survive, and this is where feast comes a cropper. The best bit of the film is the opening 30 minutes, where they set the characters up by freezing the screen and putting up Name, Occupation, Interesting Fact, and Life Expectancy information. The characters are labelled rather than named, and a lot of the survival chance ratings are genuinely amusing. To be fair to the film, everyone that watches these types of movie is at the very least subconsciously doing this, but there are two basic problems to the device. Firstly, it completely shatters suspension of disbelief and secondly, and more importantly, it’s smug. This is a recurring problem with the film. To be fair, this is certainly novel, and it is highly entertaining being more inventive than average, however, the rest of the film can’t possibly live up to this.

The next clever note is that the survival chances given are irrelevant. “Hero” who is rated as having “pretty fucking good” chance of survival is offed at the end of his opening speech. When you see this, it’s genuinely funny and lets us know that the survival rating is irrelevant. Which takes us back to playing the “spot the corpse” game. Everyone likes a bit of “spot the corpse”, however, here is where Feast chooses to play its trump card. The usual way you work this out in a film, regardless of horror, war movie, action film, whatever, is that you look at the actions and words of the character and evaluate their chances of survival based on what they say. For example, in a war film, if you’ve got a character that has to complete one more mission before returning home, then you know chances are that Death has him on his dance card. In a horror movie, if you’ve got a character that has to make it back to propose to his fiancée, then you know he may as well go up to the monster and slap it in the bollocks. It’s a bit more complicated than that, but these clichés happen far too often.

Not in Feast they don’t. The writers go out of their way to throw this out of the window, and as a direct result this is one of the most horrifically mean-spirited films that I’ve ever seen. For example, the kid dies. They kill a fucking child! I’m sure this act of supreme cuntishness is meant to be “ballsy” or “avant-garde” or some such shit, but it isn’t. It’s actually just unpleasant and obnoxious, and leaves a bad taste in the mouth. I’m not prudish about this type of thing, as a rule, but these characters aren’t properly defined. They live up to the label given out in the freeze that they’re assigned. So, for example, the fat nerd is a geek, alcoholic loser and his life expectancy is rated as pretty near to 0: the film messily kills him. Or Jason Mewes is rated as being a miracle he’s lived as long as he has, and he’s killed bang almost immediately. This actually isn’t fun. I was thinking about whether the film would be as effective without the child in it at all (or the cripple) and I came to the conclusion that, yes, it would. The death of the child doesn’t add any layers or motivation to Tuffy’s character, and having him wear earphones while his mother earns his keep by getting fucked in the next room is just nasty.

This is also an intensely juvenile, almost adolescent film. The first appearance of the monsters is capped when the little one jumps on a stuffed moose head (or something) and tries to fuck it. I’m not joking, it hops aboard and pounds away. Or we get to see the parent monsters breeding doggy-style outside. The whole film is full of “hur-hur-hur” moments. It’s almost as if Beavis and Butthead had written it. I’m not trying to be all “GET OFF MY LAWN” about this type of thing, but it seems to be cynically aimed at the teenage boy market, in which case, there’s nowhere near enough skin. Furthermore, the monsters shagging etc. just isn’t funny on any reasonable adult level.

The effects, score, acting and direction are all good. The direction is tight- there’s no wasted screen time, the score is appropriate and the unusually good cast all perform their parts with some degree of relish, particularly Allen as Tuffy and Mewes as himself. Getty is probably the weak link, but that’s because the character is meant to be an asshole, and it becomes tiresome watching him do or say assholish things over and over again. The effects are practical and well handled and, well, effective, particularly the decomposition effect. Still, it’s churlish to complain about these things when the real problem here is the tone and the script.

If this is as bad as described above, then why isn’t it getting a lower rating? Well, the first half an hour with the freeze screens is hugely entertaining, and I’d be a dick not to acknowledge that. The problems in this film all come once the “characters” are introduced. What I find aggravating is that the film breaks its own rules about Life Expectancy, so why not do exactly the same with the characters? Does Bozo have to remain a bozo for the rest of the film? No, of course not, he could develop some heroism, or some maturity finding inner strength that nobody thought he had. Instead, however, he remains a complete and utter cunt right up to the end credits. The only character that does develop is Tuffy, and when she picks up the gun marks another high-point in the film, but this is at the sacrifice of any nod to her dead child. The final point of note here, is that the scene with Honey Pie’s escape is absolutely hilarious. I won’t spoil it, but it is genuinely laugh out loud funny, particularly the reactions from the other characters when she does exactly what any of us would do when trapped in this situation.

Her name is "Heroine". Really.

One final note, there is no way in fuck that this film was made for $1m. No way. I know they claim that it is, but the pay to the extensive cast would, by itself, exceed that. Ink was a vastly superior film to this and was made for $250k, but Ink has nobody of note in the cast and the effects are sparingly used- clever cinematography makes up for it. Here, this isn’t the case. I would also, purely out of curiousity, like to know how that extensive list of producers and executive producers got paid. The Weinsteins, for example, aren’t noted for their philanthropy and I will take a bet that all these Executive Producers are all people who leant money to the film in such a way that it can be claimed not to be “budget”. I’ve read that this actually cost $3m to make, which strikes me as nearer the mark but still a bit low. In this case, why claim $1m? Does it make any difference? $3m in the 21st Century is fuck all, so why make things up. This reminds me of Colin, which apparently cost a tenner (like fuck).

Overall, this is a crap film. It’s too smug and too mean-spirited to be anything other. The, I suppose, vindictiveness shown to the under-developed characters really hampered my enjoyment of it, and the undergraduate level of humour makes this basically a worthless film. I don’t recommend this at all, it is, frankly, a bit of a disappointment, and unusually for me I now have no desire at all to see the sequels.