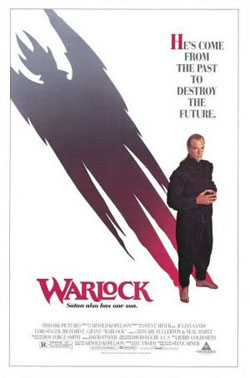 Our interest lies in stopping those who would see all good falter. It lies in stopping the powers of misrule from coming of age. It lies in finding that damned book, and thwarting a vile beast of a man who shall not rest until God himself is thrown down, and all of creation becomes Satan’s black hell besmeared farting hole!

Jarv’s Rating: 3 Changs out of 4. I may be overrating this a touch, but for the most part it’s good fun and very funny in places.

This is a film that comes with some heady recommendations. No less noble Changian brothers than, er, everyone that’s seen it had been talking about it for a while. Being a perpetual slacker (moi?), I’d only seen the sequel for some inexplicable reason. I do remember enjoying the sequel, mostly for Julian Sands’ astonishingly gay Warlock and the Picasso moment, but I’d never been tempted to dust down the original. Mindful of the ringing endorsements from all and sundry, I bumped this up the Lovefilm list and put it in.

First impressions? Not that great to be honest. Still, I consoled myself by looking again at the cast (Julian Sands, Richard E. Grant and Lori Singer feature prominently) and again at the director (House’s Steve Miner was on the helm) and decided to just battle through the medieval/ puritan crap. What followed was a surprise, both in how tame it is, and on occasion how funny.  Warlock isn’t actually a horror film, you see. Honestly, I know that sounds completely insane given the subject matter, but as House wasn’t really a horror film, neither is Warlock.

The film opens in 17th Century Massachusetts. Julian Sands has his thumbs tied to his toes (don’t ask) and Richard E. Grant is menacing him. Unfortunately for the erstwhile witch-burners, Satan steps in for one of his own and  rescues him in a really shady Pre-CGI special effect (this is a recurring problem/ source of comedy in the film). Flash forward to the future, and the Warlock turns up in 20th Century LA. He’s dazed and cut and a bit confused what with having just crashed through the window of Lori Singer’s house. Anyhoo, she wants to throw him out, but her room-mate is more compassionate and takes him in overnight. Next thing you know, the Warlock has chewed out gay roomie’s tongue and buggered off. In the meantime, Richard E. Grant’s Redferne has come to the future to capture the nefarious spell chucker. What follows is a race between the various parties as they all compete to get back Satan’s Grimoire before the Warlock can instigate Armageddon.

David Blane has nothing on Sands, and is, in fact, the biggest douche in the universe

This is a lot of fun, actually. Sands plays the part with a lot of relish, although he does tend to be on the camp side, and Grant is a one man mission to bring grimness into a thoroughly silly film. His accent may be all over the shop (is he Scottish? Irish? Whatever it is, it isn’t American) but he chews a fair amount of scenery, particularly in the final graveyard sequence. Singer is a tad annoying, and clearly the weak link of the three, but she’s lumbered having to play an old woman for a lot of the film (don’t ask). Still, she’s perky and the character is entirely essential to the nutty storyline.

Warlock is, and this is a weird thing to say, quite well written. David Twohy (of Riddick infamy) penned this in his pre-Pitch Black incarnation, and for the most part he did a good job balancing comedy and horror. Sands, for example, upon waking up in the modern day hasn’t a clue what the bloody hell he’s meant to be doing. So he tracks down a medium to get an audience with Satan to find out what the bloody hell is going on. This is a nice touch. What’s even better is the foreshadowing, that I won’t spoil, which sets up the eventual method to defeat the Warlock subtly- it’s blink and you’d miss it stuff. Clever. The dialogue is insanely hammy with each character getting their share of cheesy lines- Grant in particular is overloaded with dialogue so ripe it’s almost Stilton-esque. Nevertheless, this is part of the charm of this film, and it all works well.

Grant's conquest looked a lot less pleasant after the lighter fluid wore off.

There are particular little scenes that just crack me up- Grant trying to smuggle the weathervane on to the plane, Sands rolling around while singer bangs nails into his footprints, the possession scene, and so forth. All good clean fun. Miner bought a great sense of fun to House, and it is nice to see him transplant it to another film. He’s had an interesting career actually, if you take out Halloween H20, he’s alternated between comedy and horror- he followed House with Soul Man for example. He’s also responsible for Lake Placid, but I’m sorry to report that he shat all over his copybook recently with the dismal Day of the Dead remake in 2008. He’s the very definition of a journeyman, and has made more than enough interesting films for me to be at least mildly curious when he’s got a new one in the works. Warlock is one of his better efforts, being amusing and enjoyable for the most part, but what an interesting career.

The special effects here, actually, are complete and utter shit. In particular the execrable flying effect (which is used several times). It’s awful and aggravating, because the makeup effects (in particular the demon transformation and Singer’s ageing) are handled with some deftness. Singer has to go through various stages, and the make up holds up a lot better than her acting. Score? Can’t remember it, sorry. 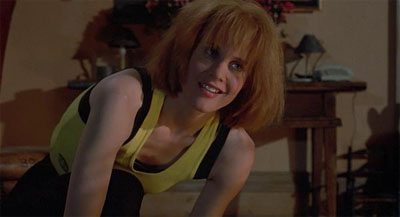 There's one word for singer here: Chirpy. Even when she's ageing at the rate of two decades a day she's chirpy. Annoying cow.

Overall, this is a good film. It’s not anywhere near as viscerally unpleasant as it could have been- and for the most part is fairly gentle. The fun to be had here is from watching Grant and Sands go to town on Twohy’s script and although it is flawed it’s still an enjoyable romp for the most part. I’ve still got a feeling that I prefer the nuttier sequel for a few reasons, but I’ll have to rewatch it.