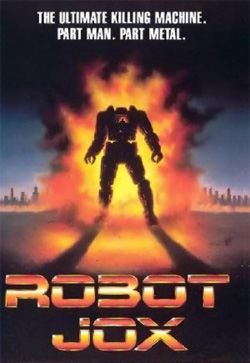 We are already dead. We are Robot Jox!

Jarv’s Rating: Two and a half Changs out of four. Fundamentally crap, really, but still damned funny on more than one occasion and it’s about people in big robot suits battling over the territory of Alaska. And to be honest, I’m never going to rate a film with a premise as incredibly stupid as that one with less than two changs.

Actually, I wish, but there’s still plenty of stupidity to be laughed at here.

My ongoing quest to see every Stuart Gordon film continues with 1990’s Robot Jox. Actually, I’m not sure how I feel about this film. On one hand, it’s about Giant Robots punching each other, on the other hand, well, they actually don’t do that much punching. Again, though, one of them does transform into a tank, and they do fight in space, but well, it’s all a bit lame and shit.

Robot Jox opens with a helpful voiceover. It’s the near future and humanity nearly managed to eliminate itself with a nuclear war (the only effect of which is that people have to wear cycling masks when outside- because flimsy wool is known to fend off radiation). As a result, mankind has come to an agreement: there will be no more war, instead 2 people will pilot giant robots and pummel each other into shards of metal before one is claimed the winner and the loser cedes territory. The Confed pilot, Alexander, is a bit of a bastard, and the film opens with him stomping the *whatever that’s blatantly America* robot into the ground. This, apparently, pisses off the US high command (which weirdly has a British geneticist and a Japanese weapons scientist) who think that there are two reasons they keep losing. Firstly, star pilot Achilles isn’t in the Robot and secondly there’s a no good dirty rat swapping secrets to the evil Ruski bastards. In the meantime, the US (I know they aren’t the US, but I can’t be arsed to look up what they’re actually called) are breeding test-tube Jox to gain an advantage and Achilles (Gary Graham) is training them, particularly star pupil Athena (Anne-Marie Johnson). They’re being overseen by “Tex”, the greatest Robot Jox of all time, Michael Alldridge- who is in a constant state of pissed off. Anyhoo, the battle for Alaska begins, and then Achilles shits it and retires. For reasons too stupid to go into, Athena ends up in the Robot for another big battle, but gets her ass kicked, forcing Achilles to hop aboard and clobber the Commie douchebag once and for all. It all ends in a draw. And I presume some spooning.

This is, fundamentally, a pretty terrible film. The story is very, very fucking silly, and the script is a barrel of ludicrous macho clichés, wafer thin characters, obvious plot twists and all manner of nonsense. The acting is uniformly crap- with Johnson and Graham (his “tragedy” face is fucking hilarious) being particularly culpable. On the other hand, Paul Koslo (complete with hilarious Russian accent) is fucking priceless as Alexander. Nevertheless, he gets all the best lines:  “I have killed you in my mind” being a cracker. Still, he does at least seem aware that this is a fucking stupid film, and as such plays it appropriately.

Nevertheless, who really gives a fuck? This film is all about the giant robot fighting- and to be fair, it does deliver on that level. Sort of. There are a few fights, and, brilliantly, because it’s a Full Moon production, they didn’t have 2 cents to rub together. As a result, all the effects are done with models- in this case, hilarious stop motion. Honestly, it’s like watching the bastard lovechild of early Godzilla movies and the fucking Power Rangers. Still, they fire fists at each other, fly off into space to fire rockets back and forth, shoot rubbish lasers and magnesium flares and whatnot. It’s all highly entertaining in its own crappy way.

Achilles was furious with himself when he realised that he'd backed his GIANT FUCKING ROBOT over his mum's Honda Civic.

I’m actually a bit disappointed in Stuart Gordon here. This is the first film of his that I’ve seen with a ZERO boob count. What the fuck? You’re making something as intrinsically silly as a film about elite pilots in giant robots punching each other, and you include several training sequences (the best of which is, easily, the fucking absurd jungle gym thing. Honestly, it looks like it’s out of South Park) and there’s even a shower sequence. Not one boob, though. This clearly, is a massive blunder. Not that I’m boob obsessed or anything, but, fuck, this is a Stuart Gordon film. What the fuck? Even Stuck has boob. Leaving aside this inexplicable lapse in his dedication to showing tits on screen, this is still solidly directed within the confines of the technology, and the idiotic script (that, er, he wrote). It doesn’t lag, and the pacing works nicely in the context of the film- we all know how this has to go so credit for not making it boring.

HUZZAH!!! HAVE THAT GIANT COMMIE ROBOT CUNT!!! FEAR MY SUPERIOR CAPITALIST MAGNESIUM FLARE AND WHATNOT!!!

Overall, I do kind of recommend this in a really cheesy retro way. It’s dumber than a sack of rocks, and there’s many a giggle to be had from the terrible dialogue (they tell the Jox to “crash and burn” before they get in the robot) and downright awful acting. Nevertheless, really, the trump card of this film is it’s about GIANT FUCKING ROBOTS hitting each other and is filmed in glorious stop motion. How can you not like something as silly as that?