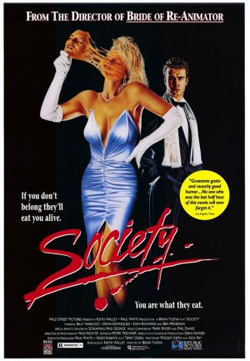 Jarv’s Rating: 3 Changs out of 4. A savage social satire masquerading as a truly disgusting monster movie. It may be a tad unsubtle but, nevertheless, the final scene simply has to be seen to be believed. Honestly, I’m a bit traumatised now.

The late 80’s were arguably the most soulless time in history. Evil over hair-gelled bastards had proclaimed themselves as the Masters of the Universe and all completely missed the point of Wall Street and secretly really wanted to be Gordon Gecko. At the same time, the true evil of the “Hit Factory” was foisting manufactured bubblegum music on the world (we’re still suffering from the legacy of that), and this period represented the absolute apex of the Randian inspired cult of the individual. Basically, what I’m trying to say is that this was the most selfish and self-interested time that I’ve witnessed and not one that I feel particularly nostalgic for. At the same time, however, Brian Yuzna was also disgusted at what he saw, but luckily for the world he had both the experience and a platform to properly voice his disgust. The result? 1989’s scabrous satire Society- a film with a blazingly unsubtle message, but a hugely entertaining look at the rich as another kind of animal altogether.

Why isn’t this film better known? I first came across it on the Basket Case 2 DVD as one of the trailers there, but as much as I love Hennenlotter’s ode to Mutant Rubbery Sex, it doesn’t hold a candle to Society. Yuzna nowadays is principally known (if he’s known at all) for Bride of Re-Animator, which is a cracking film, but he really should be more renowned. Furthermore, if there was any justice in the world, this would have launched Billy Warlock, Patrice Jennings and above all Devin DeVasquez in proper careers. I suppose looking at it that Jennings was basically a slashie, but the other two should really have gone on to much bigger things. It was probably the scene with the talking arsehole that was responsible, but that should be no impediment to starring in a film produced by Don “addicted to lard” Murphy.

To be honest, she's just as freaky as the rest of them. Except with better taste in jumpers.

Society stars Warlock as Bill Whitney. Bill appears to have it all- he’s loaded, good-looking (dodgy mullet aside), banging a hot cheerleader, good at sports etc. But he’s not happy. He’s having paranoia attacks and believes that he doesn’t fit with his family or friends and may be adopted. It becomes pretty apparent early on that he really doesn’t fit in, and yes, he was adopted, as he’s  accidentally discovered a secret society that are murdering those that attempt to reveal their existence. Furthermore he keeps blundering into things that just don’t make sense- he walks in on his sister in the shower and sees her body morph like it’s made out of plasticine, his best friend (and Jenny’s ex) makes a tape with severely strange and repellent noises on it. Things come to a head when he goes to a party held by a colossal wanker called “The Tycoon”, cops off with posh bit of skirt Clarissa, and witnesses several disturbing events (not least of which is Clarissa’s head twisting round during sex. Flexibility is meant to be a good thing, but she really takes it too far). Bill is clearly having a severe breakdown and his parents have him sedated and committed. The film culminates when Bill returns to his parental home to witness the mother of all disgusting cannibalistic orgies as the Society reveal themselves and what they are. 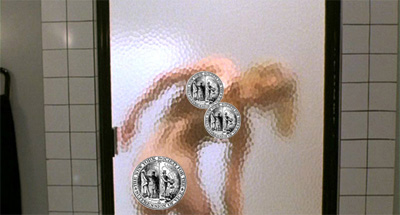 Twisted Sister were big in the 80's. Geddit?

This film has its tongue not just planted but fucking interred in its cheek. Writer Woody Keith was a Beverly Hills upper crust kid himself and based Bill and the other characters on those he recognised when growing up. The satire in this may be painted with a broad brush (the finale literally has the society eating the poor, which us stupid proles don’t understand so the Judge has to say “We’re a different species, a different class”; and just in case we really don’t get it Ferguson licks bill and says “The Rich have always fed on the poor”) but nevertheless it is still very funny and scathing all the way through. It’s also supremely paranoid. It could really be in doubt that there is anything going on, as almost all the strange occurences are witnessed from Bill’s point of view- he could well just be a teenager in need of Thorazine. My only real complaint is regarding Clarissa, who starts out as a contortionist slag, and ends up as the heroine/ Damsel in distress and love interest of the film. This is intensely problematic actually, because she’s blatantly portrayed as being bad news trash (the piss in the tea line is unbelievable), and is obviously a freak, but this has all been forgotten by the end. A bit more thought would have gone a long way with this character arc. Nevertheless, one of the biggest retrospective laughs in the film (and you’ll see why in a minute) is when Bill tells his adoptive father to “fuck off butthead”. 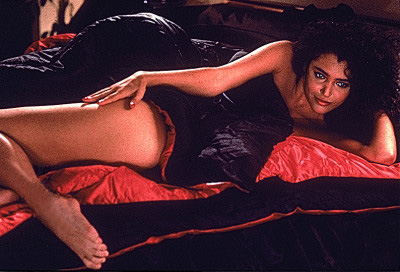 Kinky. She really can get her legs behind her head. Whether or not you want her to is another question altogether

I’m not going to waste a lot of time talking about the acting here. Warlock and DeVasquez are excellent, with Jennings providing gleefully sick support. DeVasquez, actually, understands that she’s actually playing two roles here: the hard-as-nails Society girl, and the Damsel in Distress. She’s much better when Clarissa is a dirty, dirty slag, however she’s perfectly competent in the other role. The other members of The Society themselves are all having a blast, particularly Bill’s family and the Doctor. It’s a well acted piece and if there’s any clunkiness, then it’s in the supporting cast (I can’t remember what the blonde Cheerleader Bill’s shagging at the start of the film is called, but she’s outright awful).

The effects here are practical and fucking phenomenal. Yuzna went straight to Screaming Mad George, and you honestly couldn’t think of a better person for the job. Bear in mind that the script requires severe human mutation at the finale and a disgusting joined mass of writhing lubed-up flesh (not joking, but I’ll talk about this in a second), so can’t have been easy to do in the slightest. Nevertheless, George has turned the minging up to max, and the crazy up to a level appropriate to his name. This is some truly revolting but great work- it must have been a pig to do when briefed: how do you get two people to climb into each other for example? Top stuff.

Which brings me round to the finale itself. Bleurgh. This “feeding” scene is rightfully notorious, and it is fecking minging, but it’s also righteously awesome. We hear the exposition from the Society (they aren’t aliens- rather the result of generations of inbreeding. So they’re Welsh) and they live to eat the poor, and the elaborate trip Bill has been on has been the hunt and they’ve basically done it for entertainment. However, no sooner can you puke in a bucket, they’ve all shed their clothing and are melding their lips to the poor victim and literally sucking him dry to Strauss’  “Blue Danube”. Again, bleurgh. Clarissa lets bill escape and he runs into his parents room to find his mother lying on the bed- except she gets out and has hands where her legs should be before his sister’s head pops out of his mother’s vagina. The invitation “if you have any twisted fantasies now’s the time” is, well, gross. As is the father’s appearance: He’s a set of legs with a face where the arsehole should be (see above). Bill nailed that Butthead insult. The only reasonable explanation is that the Witney’s are effectively human Play-Doh and Jenny has climbed inside her mother, while the father has folded in on himself. Really, though, yuck. 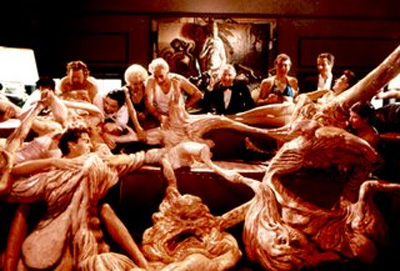 Motorhead once sang as song called Eat the Rich. Probably not a good idea as I'm not sure how digestible all that latex is.

Society is also plagued with inexplicable and poorly thought out plot holes. For example, Clarissa (again) is clearly a member of the clique, and yet, what the fuck is wrong with her mother? I won’t spoil it, but, well, yuck. Not to mention that the ending is hugely unsatisfying- there’s a feeling that the Society won, and although Bill and Clarissa may have survived, there’s no feeling of justice. Nothing really has changed here. This may be deliberate, but I did feel a bit short-changed.

Overall, this is a cracking film. I don’t think it’s as good as Bride of Re-Animator, but it is certainly a gleefully disgusting and incredibly creative monster movie. The satire may be unsubtle, but it’s very pleasant to see a little gore movie like this attempt to tackle big issues like social inequality. However, really, at the end of the day I do recommend this and purely for the finale- which has to be seen to be believed. Society is a sharp, gross monster movie, that splashes the nudity around but is strangely shy on the gore front. The horror here is in the grotesque permutations that Screaming Mad George can come up with, and because he’s on song the film absolutely rocks. Get some beer, and sit down and enjoy a lost film with more to say than you would think.