Smut! Jarv sniggers at 10 of the worst sex scenes ever filmed

So, sex on film, eh? I’m sure the pillars of civilisation are due to crumble over this subject. Honestly, mankind has raped, murdered and generally been sex-addled since the dawn of time, but cinema comes along at the arse end of the last millenium and two consenting adults feigning coitus on screen is certain to send us all back to the dark ages. Having said that, not all sex scenes are actually titillating, erotic, or even meaningful. Many of them, actually, are embarrassing, unintentionally funny or just plain inept. These are 10 absolute howlers- scenes that are humiliating for the cast, crew, director and viewer, and all of them deserve recognition for being truly awful.

Because we’re fucking family friendly, and I’ve done this at work, there’s no boob, and I’ve been forced to just use the covers of the films. But in most cases, you’re not missing anything. So with no further ado, let us begin the countdown of 10 of the most painfully inept, shameful and downright incompetent sex-scenes ever filmed:

10. Love, Sex and Death in Matador

This isn’t actually that bad a film, it is funny in parts, but there is no way that it warrants 950 million sequels and imitators. It’s basically a shit version of Porky’s without the anti-semitic subtext. Nevertheless, there are lots of laughs to be had from it- with one exception. At the final party, there’s an intercut sex-scene of the 4 teenage douchebags getting some. It cuts between Kev and Tara Reid’s tender moments, Charlie Nash going full NASH OUT with Mekon-like Mena Suvari, and Jason Biggs getting slapped around by Willow from Buffy the Vampire Slayer while she says things like “Who’s my bitch”. This is, apparently, meant to be funny. Except some bonehead forgot to actually make it funny. Furthermore, in a film that’s basically about sex it’s a fucking cardinal sin that we don’t get to see any goods at all. Aside from Suvari, actually. She can keep the top on.

8. Stallone gets Stone-d in the Shower in The Specialist.

Another crap film this one. Why are there so many bad sex scenes in bad films? And not funny ones either. Some sex scenes are completely necessary to the plot, but, on the other hand, there are some that are so totally gratuitous that I find it hard to believe any actress when they justify getting their tits out on Screen. Sharon Stone is a serial top-dropper/ beaver-flasher and has usually attempted to justify it with “blah, integral to the character, blah” rubbish, but not even she could bullshit her way out of this one. Not only is the sex scene completely un-erotic (it’s practically boner-killing) but it’s just so completely unnecessary. Kudos for Stone throwing herself whole heartedly into it, but does anyone actually want to see a naked Sly (apart from Koutch, clearly)? Yuck. Completely unnecessary, and mildly squirm inducing, the shower scene in The Specialist is a truly worthy addition to this list.

7. Linda Fiorentino the hooker in Jade

This list is going to look like I’m picking on Esterhazs. There’s a reason for this, and that’s that the lazy hack basically churned out a load of potboiler’s that depend on gratuitous nookie and an obvious twist in the 80’s and 90’s. Basic Instinct- for example, or Jagged Edge, or and this is the best, Jade. William Friedkin in a more deluded period of his career directed the dirty-mac wearing scribe’s laughable murder mystery but what really sticks in the mind is the utterly unnecessary sex scene with Fiorentino+ random dude half way through. To begin with, you see no skin at all. Secondly, it looks like a music video. Thirdly, it adds NOTHING to the film at all and Fourthly, it’s actually really boring. How do you manage to make a sex scene with Linda Fiorentino boring? That takes a special talent.

In hindsight, Kim Basinger got off lightly. Boxing Helena was a woeful film that was deservedly given a critical panning and then treated with little more than disdain by the public. Leaving aside the pervy subject matter and the distasteful themes of the film, oh, and did I mention that it was all a dream? No, shit, sorry. Anyhow, this little rant is about awful sex scenes- and this is one of the worst. Julian Sands has Sherilyn Fenn with no legs locked in his room, while he’s getting it on with his Fiancée in the lobby. Unfortunately for him, he keeps fantasising that it’s the amputee slobbering on his nob. Which leads to a hideous premature ejaculation and he rolls around on the floor making strange moaning noises while she looks on with mild disgust, and the Fiancée adds this to the myriad reasons for him being a failure. At the time, I was totally with Sherilyn when she rips strips off him later for his dismal “performance”. Pathetic, Julian- you’ve let yourself down here.

5. Not Alone in the Dark

Has there ever been someone so alien to talent behind the camera as Uwe Boll. It was a toss up which of his efforts was going to get the nod, because Lokken clinging on to the cell bars in Bloodrayne is skin-crawlingly embarrassing, but in the end I went for this one. Tara Reid, hilariously, clearly forgetting that she’d already sacrificed all dignity by agreeing to appear in a Uwe Boll film, refused to take her top off for this, but it didn’t matter. Simply because that useless purple headed custard chucker Boll has absolutely no-idea where to place a camera, and where he’s put it, the view of the bed is obscured by a load of crap in the way. She could have written “Fuck America” on her tits, and not one person in the world would have seen it. Incompetent and annoying.

4. Crass and Obnoxious: Shoot ‘Em Up 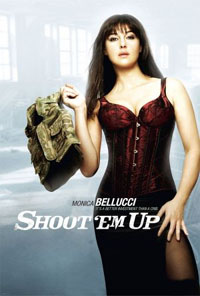 Crap film this. It basically just tries far too hard to be cool, but is actually a migraine inducing loaf of epic proportions. It’s also a gigantic stool of a film that wastes an awesome cast. Including Monica Belucci as a hooker. For no reason whatsoever, her and Clive Owen start fucking, and next thing you know a veritable army of cannon fodder burst through the door. Before you can say “moron” Clive’s killing them all, but he’s such a gigantic studmuffin that he never misses a stroke. Not only is this the very definition of offensively dumb, it’s also the very definition of gratuitous, and Belucci doesn’t even unleash the sweater puppies. Which is, on form, something she isn’t exactly shy of doing. Crap.

3. Playing with fire will get you burnt in Body of Evidence

As far as I understand it, Watchmen, or “Turdmen” as it shall be dubbed for the rest of this rant, is a really important post-modern deconstruction type thingy. It does, also, feature a fat guy with the power of impotence, who can only get it up when he’s wearing his costume. This is, apparently, clever. Honest. As smug, twattish and shit as this idea is, in the hands of Zack “talentless fuck” Snyder it becomes absolutely agonising. Let me count the ways that the sex-scene in Turdmen sucks: the music is “Hallelujah” possibly the least subtle and most hackneyed choice for a sex scene, the scene itself is explicit for the sake of being explicit, and the climax of it is the symbolic flame spurt out the back of the owl-copter thingummy. In the funnybook, the flame spurt was completely necessary as the artist can’t actually show the money shot. In the film, it’s just because Snyder was so fucking inept that he felt an overpowering need to vomit every single panel of the overrated shit onto the screen. Watchmen is a staggeringly awful film, and this one moment encapsulates precisely why. Hideous.

1. Throwing an epileptic fit in Showgirls

This is abso-fucking-lutely hilarious. I’m nigh on certain that it isn’t meant to be, but mother of God, it’s funny. Elizabeth Berkley committed career suicide with this film, and it is still staggering that Hollywood trusted Verhoeven (the man who made the worst dance scene in history in Basic Instinct) with a film all about, er, Dancing. And nudity. But mostly Dancing. The scene in question has gone down in history, and deservedly so. Berkley and Kyle McLachlan are fucking away in the pool before she leans back, he struggles to hold on, and thrashes herself alarmingly to one of the most spectacularly unconvincing faked climaxes ever filmed. It’s about as erotic as one of those nature videos where a killer whale flops onto the beach and eats a seal. Nevertheless, it is downright hilarious, and for this reason, I name it as the worst sex scene of all time.

That was fun. I’ll come back with another rant-type list when I think of one,

25 responses to “Smut! Jarv sniggers at 10 of the worst sex scenes ever filmed”