What makes an awesome cinematic death? This is a question that has, no doubt, been pondered over the ages by sage individuals searching for the ultimate truth. And me. Therefore, I’m putting up a suggested list of veritably awesome demises- some are funny, some kick ass, and some just make me smile. Nevertheless, the below 10 (which is by no means set in stone) represents 10 of the most awesome final scenes ever put on screen.

So, with no further beating around the bush, let the carnage commence! 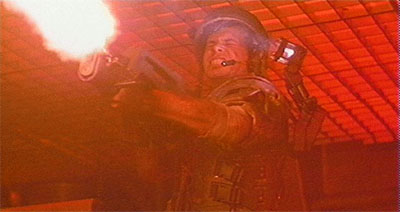 10. Hudson’s Game Over in Aliens

Private Hudson brings up the rear of this list, which, no doubt is where the man himself would have been happiest. He spends his entire time on-screen in Aliens crying and bitching like a pussy, until the moment comes when the Aliens break into the fortified area of the complex. Cometh the hour and all that, Hudson steps up blazing away screaming “you want some” as the horde of angry xenomorphs close in and eventually fuck him up royally. This makes the list for being a moment of terror driven bravery and a hugely entertaining one.

Game over, man, game fucking over.

9. Riding the Bomb in Dr. Strangelove

Endlessly parodied, this really is one of the definitive movie exits- the bomb drops and Major Kong sits atop it riding it like a rodeo cow. There’s nothing more really to say about this one.

8. You can kill the Reaper in Death Race.

Death Race is a fucking execrable film, yet another below 1 Chang candidate in Paul W.S. Anderson’s woeful career. A cavalcade of gross stupidity and obnoxious “action” it’s an assault on the cranium and about as much fun as sharing a prison cell with “Iron” Mike Tyson. Nevertheless, in a film as utterly shit as this one, this moment stands out for being actually amusing.

Driver Reaper is a colossal nobhead. He loses control of his car, and tips it over. For all intents and purposes he should be fucked. Nevertheless, he climbs out of the car and throws his arms in the air screaming “You can’t kill the Reaper” before Machine Gun Joe drives past and creams him all over the racetrack. Thereby proving that, actually, you can kill the Reaper stone fucking dead and leave him as a smear on the asphalt.

For sheer comedy and a really entertaining puncturing of misguided hubris, this is a standout demise.

7. Chomped on the Shitter in Jurassic Park

For a start, the victim here is a member of the legal profession. This automatically makes his death entertaining. Secondly, how rude is this large dinosaur? There the man is enjoying a quiet dump, when he’s rudely interrupted and chomped without even being allowed the chance to wipe.

6. Do it Rico! Starship Troopers

I’ve been using DO THE CUNT IRONSIDE as a running joke for ages, unfortunately in this instance Ironside is the cunt that gets done.

Starship Troopers is chock full of awesome deaths- the training incident, Watkins Hudson-esque exit, Flores getting toasted, Xander’s brain-to-bug-ectomy and so forth. It’s a ludicrously gung-ho movie and as such contains countless frankly awesome check-out scenes. However, for sheer badassery, nothing tops Ironside getting chomped in half by an insect attacking him from below and, in a display of purely ludicrous bravado, ordering Rico to pull the trigger on him.

A great death in a ridiculously entertaining film.

5. Ta-Daaaaa! The Joker’s magic trick in The Dark Knight.

Heath Ledger makes this film. Fact. His psychotic turn as arguably the greatest Comic Book villain is memorable on many levels, from his opening appearance in the bank heist, through to his laughing finale, this is a turn that rightly lives on beyond the actor.

Nevertheless, in a genuinely superb moment, Ledger strides into the mobster’s meet and performs a magic trick for the assembled goons. Said magic trick involves placing a pencil upright on a table and then driving a bodyguard’s head onto the pencil resulting in a pretty terminal case of lead poisoning.

Awesome. Arguably the finest moment in a good film.

4. Disarmed and done over in Deadly Prey.

Hehehehehe. Even writing this down makes me laugh. Deadly Prey is a ludicrously macho film about a “crack” (maybe ass-crack would be more appropriate) group of mercenaries hunting an elite veteran down in a forest near LA.

At the finale, Mike turns the tables and hunts the mercs down himself, eventually having to stand one on one with the toughest, baddest, biggest soldier in the film. So what does mike do? Tears the fucker’s arm off and then brilliantly beats him to death with the wet end.

Superb, a hilarious joining of ultraviolence, comedy, and justice as this motherfucker was really asking for it all film.

3. Why bother fighting when you’ve got a gun in Raiders of the Lost Ark.

Again, this is another awesome scene. The story I’ve heard is that Harrison Ford was actually ill during the filming of this section of the film and actually improvised the key moment.

Confronted with an angry Egyptian wielding two swords, Indiana Jones proves, once again, to be completely unflappable. As his assailant nears, he looks at him with mild disgust, draws his gun and blows the guy away.

Hilarious, and who hasn’t wanted this to happen in a film?

2. Motivational Speeches prove to be no deterrent to large hungry fish in Deep Blue Sea.

I love Deep Blue Sea. It’s a gloriously stupid film punctuated with moments of sheer brilliance. Honestly, “Shark wrangling”- I ask you, how is that not dumb?

Nevertheless, this is actually one of my favourite movie deaths of all time. Things are looking bad for our bedraggled crew of survivors, they’re holed up and falling out. So, now, clearly, is the time for Samuel L. Jackson to step up and give the story of how he survived an avalanche: “YOU THINK WATER MOVES FAST?”

The sharks, on the other hand, have no respect for stirring speeches like this one, and as his speech reaches it’s crescendo one particularly angry genetically modified fish pops out of the pool behind him and fucks him right up.

This is both surprising and downright hilarious, and is a worthy contender for this list. It always makes me grin, and as such, I do name it the second most Awesome movie death of all time.

1. David Warner loses his head in The Omen.

This is a truly great film. However, there are several brilliant death scenes- the old priest being impaled, or the demented Nanny’s suicide leaping to mind. Nevertheless, David Warner’s check out, is, arguably, the most awesome movie death of all time.

Warner is trying to distance himself from the Antichrist, but unfortunately for him, Damien is well on to his antics. Therefore,  because he’s not known for handing out second chances, Damien uses his supernatural powers to arrange a car crash resulting in a sheet of plate glass sliding forward and taking Warner’s head clean off his shoulders.

Why is this the best? Well, simply because when the glass takes the head off, through sheer chance it spins a full 360 in the air before bouncing on the fucking surface. It’s endlessly cool, and can be watched over and over again.

This is a truly splendid death in a really first-rate film.

Well, I’m more than aware that I’ve omitted lots of candidates from this list, but it’s really more of a starting point for debate than anything else. Nevertheless, I would happily say that these 10 deaths represent some of the finest terminal moments in cinema.

It’s all good fun and many thanks to Droid for a lot of these suggestions.