Hoo-boy this film is shit.

Actually, on paper, this looks like quite a good idea (in a really stupid kind of way). Take Casper, modern vampires, LA, gangbangers and an Austrian Van Helsing, mix together with a decent amount of gore and season liberally with a shit load of gratuitous nudity, and you should have a recipe for some silly fun. Yet, it isn’t fun (for the most part).

Personally, I don’t even want to think about how much in the way of gear was consumed in the writing of this film. It has similar sensibilities to those of a 14-year-old attention deficit teen off the Ritalin. It’s just an astonishing mess- almost every idea that Elfman had is thrown at the screen, and most of them don’t work. This, actually, is pretty easy to guess when you know that the title went from being “Revenant” to “Modern Vampyres” to “Modern Vampires” for the USA, but back to “Revenant” for the rest of the world.

Casper van Dien plays Dallas, a world-weary Vampire douchebag. He’s come back to LA (despite being told not to by Dracula) to stop the antics of a serial killer vampire called Nico (Natasha Gregson Wagner). In the meantime, he hooks up with a load of weird Eurotrash vampires (played variously by Kim Cattrall, Craig Ferguson, Natalya Andreychenko and some other bugger that I can’t remember and don’t care about) for shenanigans. He’s also being pursued by Rod Steiger’s fascistic Van Helsing and his cohort of homies (one of whom is named “Timebomb”). Film ends in massive fight and Casper then buggers off to New York with Nico and Nico’s lesbian friend (Natasha Lyonne) for fun, frolics and a filthy threesome. I’m not kidding about that, it isn’t so much suggested as “blurted out”, while vampire Van Helsing runs around screaming like a demented person. 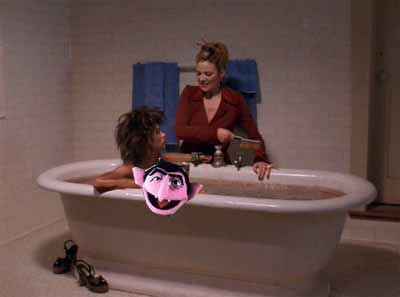 "You are one dirty bitch" "Who the fuck do you think you're talking to Natasha, don't you know I was in Big Trouble in Little China"

This, much like football, is a game of two halves. The first half of this film is an irritating and agonising mess, shoddily written and painfully performed. In particular Cattrall and Ferguson are fucking awful: Cattrall is sporting some laughably bad Swedish accent, and Ferguson is just embarrassing every time he’s on screen. It’s clearly aiming for ironic comedy (check the scene with Cattrall packing away “lunch” in a hamper) but misses the mark by so fucking far. When me and Droid actually tried to watch this, we didn’t make it into the second half, because it is just so cringeworthy.

The second half, on the other hand, is hugely better. There’s a skit on Pretty Woman where Nico goes shopping and eats the sales assistant, more boob than you can shake a stick at: Wagner in particular seems to be almost allergic to her clothing; I suggest you change your washing powder, love, and lashings and lashings of lovely violence. However, the real difference is that the comedy (with one exception that I’ll come to in a minute) begins to work. For example, the execution of The Count is astonishingly funny as Timebomb and his vampire homies have turned The Count into a pincushion of stakes and are last seen chasing him down the street with a petrol can. 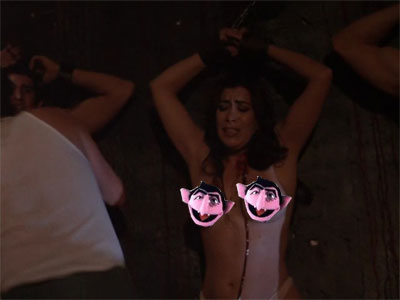 Other than the actors mentioned, Casper is good in the Straight role in the film, and Wagner equally so. Steiger is fucking dreadful as Van Helsing, however, and I can only assume that he’d been watching ‘Allo ‘Allo for accent tips before turning up on the set drunk. Lyonne is completely wasted in a totally underwritten part, that only exists for the fanged 3 way gag at the end, and Udo Keir is reasonably amusing before being decapitated.

The problem, though is that the writing is just too fucking patchy. For every one good joke there are four that fail and for every one interesting character there are three teeth-grindingly hideous ones. Furthermore, some of the dialogue (Casper explaining that he can fuck forever with the right lubricant, for example) is embarrassing for all concerned and some of the scenes are monstrously ill-conceived. For example, Cattrall is tied to a bed and then mutates into her true vampire form, this then encourages all the gangsters to hop on board and run a train on her. This, believe it or not, is played for laughs, but in reality it’s gross, crude, insulting and just not funny. Gang rape of a corpse is not, for me, an obvious source of comedy. Hence why I haven’t seen Deadgirl.

She didn't take the makeup off before Sex and the City started, you know.

The blame for a lot of the mess here must fall on Richard Elfman. I’ve seen tons of reviews in various places praising this to the hilt, but at the end of the day it is a colossal mess, and although I did finish the film thinking that it wasn’t too bad, that was almost entirely down to the second half. He directed it, so surely should have had the discretion to remove bad ideas such as the vampire that’s been pregnant for 60 years- a terrible and overly-laboured (sorry) unfunny joke. 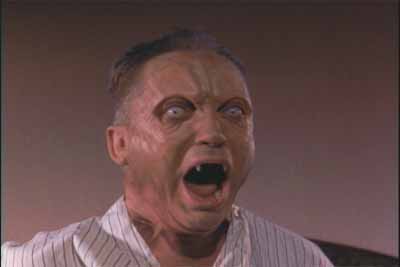 You think he's having a prostate exam. He's not, actually, he's watching the film.

Overall, this is crap. I’m going to be generous and give it one and a half mobile infantry Casper out of four, but to be honest, I don’t recommend it. Revenant is neither half as funny or half as clever as it thinks it is, and while some bits of it are amusing the honest truth is that there’s a huge fail just waiting round the corner to crush the life out of it again. Not a good film, and I’m beginning to regret doing this series.