I’ve been hitting the road pretty hard here lately and haven’t had much time to pull over and see the zany sites I’ve passed along the way. Luckily all these snow days have given me plenty of free time to fill with more shitty comedies.


This next film was just a random pick. It premiered on HD Net this week and last week they showed Barry Munday which felt like a fly on the wall look in the life of Werewolves own Droid and was pretty funny. HD Net is somehow related to Magnet Releasing and they distribute lots of cool shit (Let The Right One In). SOOO seeing they were premiering this next movie I had never heard of I just assumed it was some interesting cool new movie from Magnet possible……oh how wrong was I.


You are now entering Weirdsville (yes its in Canadia): 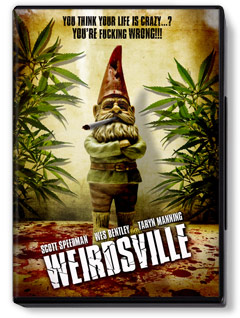 It turns out this is just some odd ball Canadian comedy from 2006-7 that just never got popular. I’ve actually been pretty interested in Canadian film lately, granted they seem to just make the CANADIAN VERSION of something American and here is more of the same. This time its the Canadian version of a stoner comedy. Too bad no one told the makers of this film that throwing a bunch of elements of a stoner film at the wall then mushing them all together isn’t going to produce comic genius.


To accurately go through the plot I would sound like a crazy person.
I’ll just give you a list:

WHOA look we are such druggies!

That’s it in a nut shell. I’m really at a loss as to what to say about this mess of a film. There are hints of DEEP MEANINGS being forced in when the main character played by Scott Speedman sees himself skating without skates and starring at a dead rat in a toilet. I’m guessing that has to be a Canadian thing because I got nothing out from it.


The movie starts out with Wes Bentley getting hold of his coke fiend buddy (Scott Speedman), who recently spent the last week trying to kick the habit, to help him bury their best friend Matilda (Taryn Manning) who just overdosed (or do drug addicts not know how to find a pulse??? HRMMMMMMMMM….). Then it barrels into a bunch of nonsense from there (see the list).


What’s odd is that the idea and plot are far enough out there that had the director stuck with one tone it MAY have sort of worked, but instead you are just thrown about with all this randomness which is all very mean spirited and very very hardcore drug heavy. This isn’t a silly LETS SMOKE POT, they are mixing crank with weed and shooting up and its all so HO HUM. The two leads (Wes and Scott) seem really up to the part (look at Wes’ WACKY facial hair) but they just don’t work. These two dudes I seen do nothing but play über stoic kind of a-holes, here they are suppose to be good friends but they both come off as such a-holes that it was hard to believe either of them had any experience with drugs in their lives beyond slipping the odd roofie.

Oh yeah did I mention that we are major druggies?

The weirdest thing about it all is how nonchalant the film is with all the violence and drug use. Normally something like this wouldn’t bother me, it still doesn’t, it was just so odd. I wondered if the director thought he was making some hard hitting film similar to Requiem For a Dream, or something more akin to How High. These two guys try to hide a dead body, witness a murder, rob a house try to rob a mall, get picked up by the women whose house they just tried to rob and then it all works out in the end, HURRAY!

Oh yeah we also totally got some midgets in this bitch.

I feel like blabbering on and on more about this film would be falling into the trap of the film. So unlike the movie I’m just gonna cut my losses.