Quick confession time: I haven’t read the short story. I binged on Stephen King when I was a teenager, and then just sort of stopped and haven’t really had any urge to go back to them. Nevertheless, I’m assured that this is a cracking read, and regardless of that it has the proud boast of standing in the handful of  Stephen King adaptations that aren’t terrible alongside Stand by Me, Carrie, The Shining and Misery (before anyone says anything, I really don’t like The Green Mile).

I was pretty indifferent to The Mist on release. It just didn’t appeal to me at all. I wasn’t ignorant of it, but Ain’t It Cool News were being their usual onanistic selves over it, something that always puts me off, and I’m always wary of anything with the words “Stephen King” attached to them. However, Frank Darabont was in the directors chair, and he makes good movies and Thomas Jane (who I really like and don’t know why) was playing the lead. So I resolved to see it on DVD, and I’m glad I did. 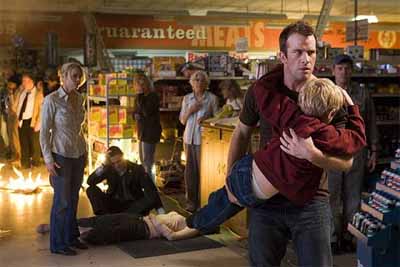 Thomas Jane plays David. David is an artist of sorts. He lives with his family in a small Bodega Bay style community in the middle of nowhere. One night, the town is clobbered by a storm, and David has to take his son into town for repair materials. While in the shop a ghostly mist rolls in (the origins are never really explained- the film does hint that it’s the army messing around with something or other, but that’s speculation from the characters, albeit probably accurate) and the various shoppers including Toby Jones, Marcia Gay Harden, Laurie Holden and Andre Braugher are forced to repel a siege of strange beasts that live in the mist and hunger for human flesh. In the meantime, the tension in the store itself ratchets up, and divisions among the survivors come to the fore with inevitably tragic consequences.

At the heart of the division is Marcia Gay Harden’s Mrs. Carmody. Mrs. Carmody is a lunatic fundamentalist Christian, and as events begin to look more dire, her brand of rapture Christianity gradually insinuates itself into the scared group as they let their guilt and fear get the better of them, and it’s this that provides the film’s main strength. It is genuinely tense watching the group divide, and her performance is so compelling that I wonder if she has a career in televangelism ahead of her when the acting parts dry up. That Carmody is also sympathetic pays real testament to a multi-layered performance and it really was a truly fine turn from her. 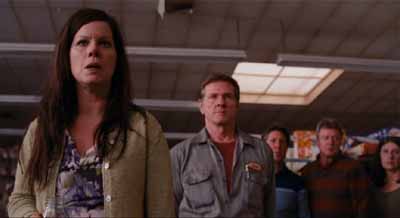 It’s also a testament to some really great writing in this film. All the relationships are completely believable and furthermore utterly plausible. Take, for example, David’s contretemps with his neighbour Brent Norton. There’s a lot of history here that the film never really goes in to, but one brilliantly written scene has Jane trying to convince Braugher that there are angry killer tentacle beasts out there in the mist. Braugher, however, is having none of it- he’s been at loggerheads with Jane in the past and is absolutely certain that Jane is pulling some dickish prank on him. Which, to be fair, is remarkably more plausible than the truth. The film manages to put the whole bitter history between the two men across in the dialogue- there’s nary a bit of exposition, and more is left unsaid than explained- which is typical of the film as a whole.

Aside from that, the rest of the acting is also first-rate. Jane is particularly good, but Toby Jones provides excellent support. Even the slightest and least important characters are played by actors that can, you know, actually act rather than just scream. Take, for example, shop boy Norm. Norm is blatant cannon fodder and it isn’t a huge shock when he’s dragged under the garage door by a massive tentacle to a messy death. However, Chris Owen (better known as The Sherminator) plays the part, and gives Norm a believable air of cockiness and bravado. It’s a minor role, but it would have been very easy to cock it up. 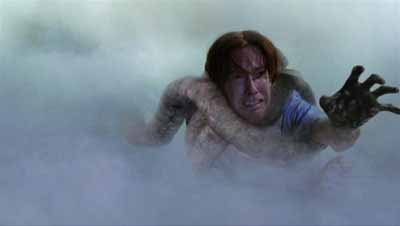 The monsters in this film, whether they’re giant tentacle beasts or angry flying insects are excellent. They look and feel solid, and more than that they are actually scary. When the glass breaks and the killer wasps bust through the film is absolute edge-of-your-stuff and the giant beast seen at the very climax is a masterpiece of monster work. I can’t praise the effects in this film enough.

I’m going to talk a bit about the end now, so this is the spoiler warning. 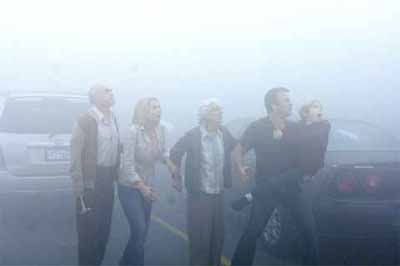 I don’t like it. I think it’s unnecessary and cruel. King says now that he wishes he had finished the story the way the film ended, but I personally disagree even though it’s a real sucker punch and it is truly devastating. The actors all manage to portray the hopelessness of the situation convincingly, and when the moment comes, there is no doubt that this was the only option left to the characters. However, and this is where I disagree, the mist then rolls back and Jane is left sitting there in misery while the army comes in and cleans up. I personally think the film could do without this- the characters have been driven to their limits and the ultimate sacrifice has been made- the apocalyptic bleakness of the film is complete. When the mist recedes, however, for me it feels cheap, like a nasty trick that an oh-so-clever director has pulled on the audience and as such unnecessary. We have already seen the depths to which man can sink, and we’ve already witnessed how far one person was willing to go to spare his companions unnecessary pain, do we really need to see him wallow in misery while the army rolls in to clear things up? It just left a nasty taste in my mouth and I would have vastly preferred the film to finish with the fog still in.

Overall, and I am completely aware that my criticism of it is entirely subjective, The Mist is an excellent film. It’s truly first-rate, and regardless of any feelings about the ending that anyone has (whether you like it or not) it is more than worth a watch for some fine writing, superb acting and splendid beasts. I recommend this one heartily, and give it 3 and a half ridiculously chuffed Stephen King heads out of 4. This is an absolutely cracking film. 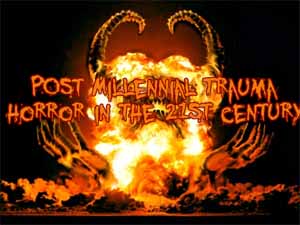