He’s here, somewhere in this house

Jarv’s Rating: 2 and a half Changs out of 4, and I’ve got a feeling that I am being unfair on it. A fun but flawed monster movie.

House is a film that I’ve been meaning to see for years, and just never got round to it for one reason or another. So, in the interests of completion and because I’m pig fucking sick of watching the ninth rate crap that passes for video game adaptations, I finally put it on, and I am glad that I’ve corrected this oversight.

"William, why have you got your cock out under the table?"

William Katt (probably most famous for Carrie) plays Roger Cobb. Roger is a novelist who keeps recycling his personal experiences in Vietnam in his books. He’s under a great deal of mental stress, his son has disappeared, wife has left him, and he’s tormented with guilt over his actions in Asia. His aunt has just offed herself, and he’s inherited her spooky house. Once he’s moved in, he’s forced to fend off nosy fat bastard neighbour (played by George Wendt), and pushy and flirtatious single mother neighbour that wants to use him for babysitting services. However, by far his biggest problem is, though, that he’s living in a monster infested hell hole.

This is a genuinely funny film. Katt plays it relatively straight with an expression of bemusement permanently attached to his face. Yet, there’s a sense that he knows it’s flat-out silly to be dressed in combat gear attempting to harpoon a monster that may or may not be imaginary that lives in his closet. It’s a good central performance, and it is fair to say that all the turns in this film are all competent and all effective. Wendt in particular is just playing Norm from Cheers, but he’s likable enough and you don’t want to pummel his fat face in, which would be a severe danger with his character. 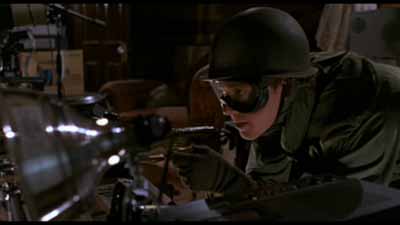 I'm not sure what he thinks he's playing at here.

However, this is a confused film. The flashbacks to tell us why Roger has so many mental issues are all kind of shoddy and for the most part a bit dull. You don’t really get a feeling that Ben  (Richard Moll) is his best mate as the first time we see them Ben is playing a stupid practical joke on Roger. The idea is clearly to try to convince the audience that the monsters may or may not be part of his fevered imagination. It doesn’t work because they’re too obviously real, and all the messing around in Nam distracts from the stars of the film- the demons/ zombies. 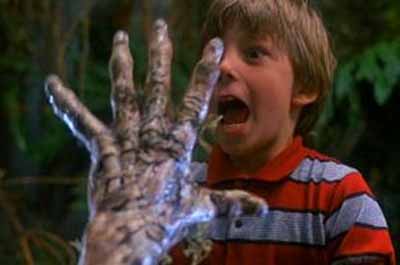 This is completely irrelevant to the film, but still, who doesn't like a zombie exploding from the ground?

As you may have gathered, the monsters in this film are outstanding. Whether it’s Demon Sandy, Skeleton Ben or the other beasts and various demons, they’re all great fun, and the film squeezes an awful lot of intentional comedy out of them. It doesn’t matter that Ben’s plan for vengeance is essentially crap, because he’s just so amusing. However, I do have to say that the most consistently entertaining beast is Demon Sandy, and the film milks a quite impressive amount of laughs out of her appearances and demise- particularly the sequences involving her decapitation and disposing of the body. Very funny stuff.

Cunningham and Miner (producer/ director) are more notorious for the Friday 13th Series (and Kane Hodder does make an appearance here doing stunts) but I have to say that strikes me as unfair. This film is much more fun than Friday 13th, it’s more consistently amusing, and although there’s nothing in the way of nudity in this film, it’s played with a sense of humour and is just far more pleasurable to watch than most of their insipid and uninteresting more famous work.

"You weren't there, man, you don't understand. Now where's the weed"

For a fairly simple premise, this is a nice twist on the haunted house- monsters rather than ghosts, and although some of the makeup work (you can see Moll’s lips beneath the Skeleton Ben gear) may be a bit weak, monsters as a rule are much more entertaining than spectral frights. Probably because they are corporeal and as such can be physically fought. However, given that there is a feeling that Roger is going nuts due to Nam guilt, perhaps ghosts and ambiguity would have been more appropriate- even if less amusing.

Overall, I do recommend this film. It’s fun, amusing and a really pleasant way to spend a Sunday afternoon. House may be a product of its time, and it may be a bit confused and a bit cheesy, but I do have to say that this has been a really good bit of Schlock and I am now quite looking forward to the sequels- one of which I’ve heard is completely loopy.

I’ve got a horrid feeling that this film will be on the remake list, and will be redone as a straight horror. If such terrible events come to pass then it will be a crying shame. This is a clear Horror/Comedy and it has just got a lot of heart, something that no amount of remake hackery can replace, so let’s hope that the likes of Platinum Dunes don’t bother. Leave it in the past, please, and let those that want to see a good, amusing, monster-fest find the original.