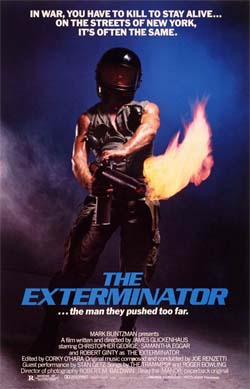 “This “Exterminator” is the most dangerous serial killer in the United States and he is in New York City! Now what do you think about all this?”
“I think you need to take a shit. It’s coming out of your mouth instead of your asshole.”

The esteemed ContinentalOp is a strange man. On one hand he inflicted two of the most offensive films of all time on us, and only Droid’s colonial Aussie stubbornness prevents the hat-trick. On the other hand, he’s got an encyclopaedic knowledge of cinema, and is particularly good at sleaze cinema. Two of his suggestions, Vice Squad and Angel, I actually reviewed as underrated simply because they were so far from what I was expecting and have both been unfairly maligned, and this, The Exterminator, was the third.

The Exterminator is one of those films that really does open with a bang. In this case, it’s a huge fucking explosion as we’re dropped straight into the middle of the Vietnam War. Robert Ginty’s John Eastland and Steve James’ Michael Jefferson have been captured by the Vietcong and are being brutally interrogated. Michael escapes and saves Eastland’s ass. Next thing we see is Eastland and Jefferson working a shitty menial job in New York City. There’s an altercation with some thugs that leaves Jefferson paralysed, which spurs Eastland to go on an all out rampage on the criminal scum of the city.

Included amongst the scum are: A homosexual paedophile brothel owner and a state senator with a nasty blow torch fetish; a mob boss; many street thugs; and a couple of guard dogs. The various kills, which is why I’m watching the film, are brutal, not for the squeamish and surprisingly enjoyable. The vengeance on the pervert senator (testicles blown off with a ridiculous gun) is hugely satisfying as we’d witnessed him take a soldering iron to a harmless hooker, but the star of the show is the mob boss and the mincer- yuck. That put me right off hamburger for a while. 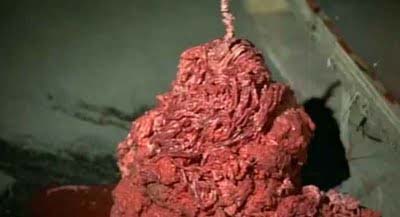 The acting in this is pretty shit- Ginty only seems to have one facial expression and anyone that’s seen the awesome American Ninja knows that James hasn’t exactly got a huge range. The real acting chops of The Exterminator are supplied by Samantha Eggar as a Doctor and Christopher George as the cop chasing The Exterminator. They’re both good, with Eggar making the most of a really underwritten role. I just need someone to explain to me what the hell George is doing cooking a hot dog on a desk lamp- that can’t work, surely?

There’s quite a lot of interesting things to say about this film, notably that The Exterminator is arguably the first screen version of The Punisher and even taking my fondness for Punisher War Zone into account probably the best. The action is exciting and grimy, the brutality is satisfying and justified and the entire film is taut as a drum. I always find it surprising that there seems to be such difficulty adapting Frank Castle to the big screen- The Exterminator manages it with no little aplomb- is it because there’s a slavish desire to fit funny book canon? It makes no sense to me why so many different versions of The Punisher have failed- it should be so fucking easy. 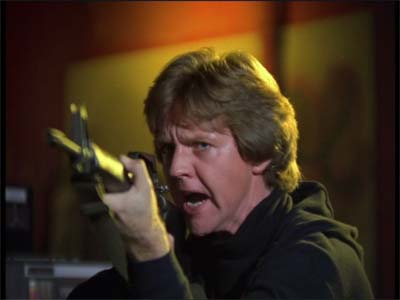 Secondly, there’s a really sleazy, grimy atmosphere to the film. Take the exchange between Eastland and a “hotel” owner haggling over the cost of rental clean sheets. Fucking yuck. I dread to think what sort of diseases you could pick up there. Furthermore, the dialogue has an authentic feel to it, whether it’s the mafia boss berating an underling, or Eastland’s banter with Jefferson. The film reeks of verisimilitude, much in the same way that Vice Squad does, in its depiction of the underbelly of 1980’s America. Although, admittedly, the one man army that is Eastland wouldn’t have anywhere near as much in the way of ordinance and would undoubtedly be caught fairly fast.

There’s also a huge amount of unintended comedy in the film. The crimes and whatnot are meant to be harrowing, but some of them, particularly mugging the old lady, aren’t- they’re amusing. The best example of unintentional comedy in the film is when Eastland kidnaps the mob boss. His brilliant plan involves pitching up at the right restaurant at the right time, hiding in a bin in the toilet, waiting for the boss to take a dump, sneaking up while he’s washing his hands, sedating him, pushing him out of the window and escaping. This is fucking comedy gold- there are so many things that can go wrong, and on my second watch of the film, I did nothing but make smart arsed comments about it. Still, in a film as grim as this, you’ve got to take your chuckles where you can get them. 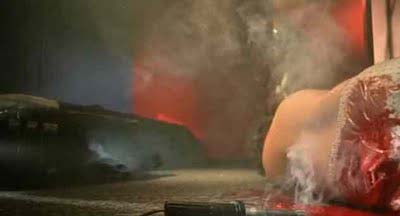 Interestingly, I’d never heard of this film before Conti recommended it. There’s a reason for this, and that reason is, for a fucking change, the British Censor. What happened was that The Exterminator was lumped in on the Video Nasties. It was never actually placed on the list, but intense pressure was applied which resulted in all copies of it being yanked from video shops across the UK. Many of the films on that list still haven’t seen the light of day in this country (for good fucking reason), and The Exterminator is one of them. It’s a crying shame, given the amount of toss that does get a proper release, that this film has been buried, but I see recently that it’s got a certificate so may well be unearthed soon. One can but hope.

Overall, this is a good film. It’s a particularly brutal sleazy schlockfest, and a hugely entertaining one. The pace never lags and the film could never be described as dull. It may stretch credibility on occasion, and there is a streak of nastiness that runs through it, but all in all, The Exterminator is more than worth a watch.