I don’t know what happened, maybe everyone was jealous of my well-earned Golden Chang for the ridiculous Challenge of the Year, so we’ve all decided to enter the brain cell devastating race to the bottom that is all 5 Highlander films.

Yes, you read that right. All 5 of them. Your audacious Changians are plumbing hitherto undreamt of depths of human misery and we’re documenting it here.

Continuing for every day this week, there will be one fresh Highlander review (with the exception of part 2), supplied by me. So with no further ado, let’s launch HIGHLANDERPALOOZA 2010 with the first film…

Highlander was Russel Mulcahy’s 1986 American debut about sword fighting immortals who are killing each other purely because there can be only one. The last one standing will receive some sort of awesome god-like power. The film skillfully (ha!) mixes historical recreation of dubious quality with modern-day stabbery to create a blend that can only be described as 7 shades of awesomeness.

Christopher Lambert plays Connor Macleod (of the Clan Macleod- which seems to me, being of Scots blood and actually knowing what my clan is, one of those imaginary clans made up to flog credulous yank tourists overpriced Scottish plastic tartan tat. You know, like the McGoldsteins. Except, unbelievably it is actually legit- it’s from the Western Isles where men are men and sheep are frankly petrified) who hides as an antique dealer called Nash. The plot, such as it is, of Highlander involves selected highlights of his life and the preparations for the final showdown against The Kurgan. What this amounts to, in practice, is a gloriously stupid excuse for stabbery, decapitations and terrible 1980’s special effects. 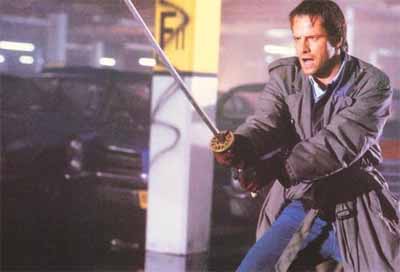 I like this film. It’s hilarious. The script is pretty shitty in a really good way containing loads of hilarious (and endlessly quotable) dialogue-“He’s a Highlander, by God, and the last sound he hears should not be that of a wailing woman!”- of the psuedo-macho and overly testosterone-driven variety. The plot itself makes no sense at all, however, but it really doesn’t matter- all we care about is that it maneuvers our protagonists into situations where they have to cut off each other’s heads. Highlander may be consummate stupidity, but it’s a shit load of fun.

The casting and acting are monumentally terrible. Who in their right mind would cast a Frenchman, Christopher Lambert as a Scot, and the archetype Scot , Sean Connery, as an originally Egyptian but current Spaniard? It’s absurd, and a lot of the fun in it is watching the truly wrong performances they put in. To be fair, Connery is clearly loving every moment of it playing Ramirez, and get some great lines such as “You have the manners of a goat, and smell like a dungheap” or the simply awesome haggis exchange. Nevertheless, the acting plaudits go to Clancy Brown as the evil Kurgan. A real bastard, who apparently if victorious will damn humanity. This is a stomping turn, all malevolent evil and untamed savagery. The exchange with the priest, “forgive me father, I am a worm” is in particular outstanding. It’s a great turn from the big man. Roxanne Hart gives female support and is just “there”. She doesn’t contribute much but doesn’t stink up the screen either.

Anyway, that’s enough of the psuedo-critical nonsense. This film is enormously stupid, and yet who gives a fuck? I don’t. I’ve seen it countless times, and even watching it this evening I giggled all the way through it. Highlander is about sword fighting, stupidity, awesomeness, sword fighting, decapitation, unintentional comedy and awesomeness. A large part of this, actually, is down to the soundtrack. I normally dislike Queen for being overblown nonsense, but I do have to say that when on soundtrack duty they were consistently brilliant. The music here is absolutely bombastic, and hugely theatrical but gives the film an enjoyably epic feel.

Then there’s the sword fighting itself. It’s hours of fun. There are numerous lengthy battles in Highlander, and each one ends with a decapitation and then some truly ridiculous special effects. Rubbish looking electricity spirals round the survivor, and in the climactic fight in particular forms into a big dragon (eh?) that pummels Macleod. That makes nary a jot of sense, but who gives a fuck, it’s all in good fun. Even better for those that like these type of things, like me, you can see the fucking wires that are supporting Lambert as he circles in the air. Although, I do have to say that I’m being a bit unfair as the effect with the big windows shattering on cue is fun and impressive. It’s only a simple effect, but it really makes me feel that something truly epic is happening. 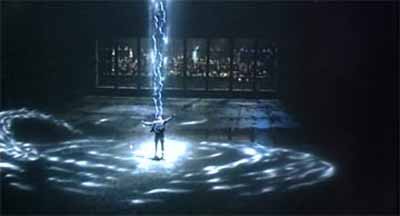 Overall, this is a stomping film. I’m not giving it a maximum, because it is extremely silly stuff, however I am going to give it 3.5 Changs out of 4. It’s fucking outrageously entertaining and a glorious slice of dumbhouse.

Highlander is an amazing film, where all of the constituent parts are completely wrong, but somehow these shoddy and ill-fitting components combine into an absolute masterpiece of pure fun and frolics. Top drawer stuff, and I’m really glad to come back to it again after a few years.

Tomorrow night in HIGHLANDERPALOOZA! is the frankly fucking awful Highlander 2: The Quickening. Several of us are getting drunk and ill-advisedly live-chatting it. If you want to join in, feel free- the fiasco starts at 8pm English time.

So, until then remember that there SHOULD have been only one!