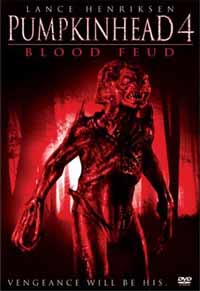 I’ve finally waded all the way through to the end of Pumpkinhead 4 and the series has had its ups and downs. This is a down. I actually blame the third film for my thoroughly mediocre feelings towards this one, as if it hadn’t been acceptable this wouldn’t be such a let down. Nevertheless, as a fearless schlock killer, I did put this on straight after three and this is the only way I can describe it: Have you ever been to a small seaside town in the summer (Doesn’t matter what country)? You have a great time, the sun’s shining, people are happy, you eat ice cream and drink beer on the beach. It’s all very pleasant. Now, imagine (and I went to university in a town where this is really analogous) you return to the small village in January- the sky is gunmetal grey, there are tumbleweeds composed entirely of forlorn flyers blowing around the street, the rain is lashing down and all the locals have resentful and unhappy faces. It’s technically the same place, you can recognise all the same landmarks, and the beer still tastes the same, but it’s a totally different and much more rotten experience.

I’m tempted to give up on the quest to find a horror series with a good final part. I know that there are examples out there, but they usually contain at least one colossal misfire along the way, and the last part is usually so painful and obnoxious that it makes me look less fondly on the other parts along the way. Pumpkinhead 4 isn’t that bad, thankfully, it isn’t a Candyman 3, Leprechaun Back 2 Da Hood, or Halloween with Busta Rhymes (there are remakes, you say? What sort of pervert would do that?)  but it certainly isn’t a Seed of Chucky, New Nightmare or even Jason X (what they remade those last 2 as well? Really? I’m sure nobody would be that stupid). 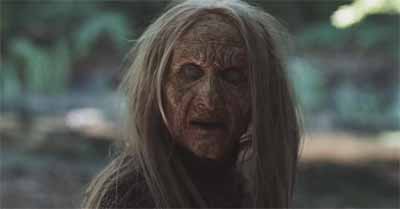 Pumpkinhead 4: Blood Feud opens with a bang. Pumpkinhead (a really wank, shitty, unacceptable version of Pumpkinhead) is jumping like a flea on speed through the woods chasing down two arseholes on dirt bikes (a nice nod to the first film). One of them is killed and the other (Rob Freeman) arrives at a cabin in the woods. Inside the cabin is the man responsible for raising Pumpkinhead. After a bit of chat, Rob shoots the summoner and Pumpkinhead dissipates. Lance appears to tell him that it isn’t over, and he’ll have to pay at some unnamed point before disappearing. Fast forward 5 years into the future and  we’re introduced to two clans: The McCoys and the Hatfields. The McCoys are painted as being the more upper class of the two, and the Hatfields are rough redneck types (incidentally the film forgets this about 10 minutes in and they both become rural inbreds). The youngest McCoy, Ricky (played with a complete absence of talent by Bradley Taylor) is having an affair with Jodie Hatfield (an excruciating turn by Amy Manson, another cut price Scottish Actress now working in TV land in the UK). These star-crossed lovers (aren’t I fucking clever, well, smarter than the dickheads that came  up with this tripe, anyway) are conducting their affair behind their families’ backs. Jodie’s family find out, and an unfortunate accident occurs resulting in the death of Ricky’s sister. Ricky, as a result, turns to the Witch Haggis for vengeance and the chance to be free with his “beloved”. As romantic gestures go, this one isn’t going to cut it. I can’t imagine Mrs. Jarv would be particularly enamoured with me if I raised an angry vengeance demon and had him slaughter every man, woman and child that she was related to, but never mind. Events rapidly spiral out of control (Lance turns up every now and again to tell Jodie that “only she can end it”- which, by the way is utter horseshit), the two clans unite to fight off Pumpkinhead and Jodie kills Ricky. The End.

What a load of shit. Now I write it down, it’s worse than when I was watching it. I don’t know which semi-literate and point- missing fucknut decided to try to crowbar Romeo and Juliet into the Pumpkinhead series, but I suspect that this started life as a script intended for something else entirely. We’ve spent 2 films in this town, how come we haven’t heard of either of these families? Especially considering one of them, apparently, “Ruined the town”. This, actually, is indicative of the abject toss that passes for writing here, another pertinent example is that the “blood feud” started over a fucking car, and when the families make up, it’s because McCoy presents Hatfield with the same car the fucking argument was over. Incidentally, this film is meant to be set in the present day, and yet everything about it screams out “depression era”. The car at root of the dispute looks, for example, like it’s from the Untouchables (an ideal car for rural America, I don’t think), no cunt seems to have electricity or running water and so forth.

Then there are the rabid inconsistencies in the writing. For example, the two families (with a bit of help from Sherriff Dallas, the cunt that survived at the start) meet up and work out what they have to do to kill Pumpkinhead (kill Ricky), yet Lance keeps turning up and telling Jodie that only she can do it. Why? What the fuck is so special about her? Surely any cunt with a big gun could deal with that whiny little bastard. I’ll do it with a rusty spoon just to get him to fuck off, actually.

Who's seen Alien 3 then?

So far, so awful, and I’m not even started yet. The acting is on a par with the writing. Manson is diabolically dreadful, that cunt from Ugly Betty is annoying and wooden, and the rest of the supporting cast are hugely irritating. However, worst of the lot, by a long way, is Bradley Taylor as Ricky. Ricky is an obnoxious, whiny, stupid, pathetic, cretinous, useless, moronic, smug, idiotic waste of the time his parents should have spent playing scrabble. Taylor manages to take this character and put in a performance so bad that it isn’t even funny. It’s as if he thinks he was auditioning for True Blood here., and I’m unsurprised to see that he’s not been in anything else since. He’s a shitty fucking actor and I’m glad he’s sunk without trace, not to mention that he’s got a face you would never get tired of punching. Actually, he looks a bit like a slightly douchier version of that cunt in Deadgirl. The only exceptions to the level of suckitude are Lance and the Witch (played this time by the returning Lynne Verrall- another cut price British Actress). Their exchanges are the only bits of the film that could remotely be called “acting”, and they are actually both quite good. So kudos to them.

I’m really beating the shit out of this film here, and I’m making it sound like a huge failure. It isn’t that bad, being far better than  part 2, it’s just not as good as either part 1 or part 3. There are, however, two things about Pumpkinhead 4 that redeem it. The first is that there is a massive amount of gore and violence in this film. I think, honestly, that it’s far messier than the other 3 put together. Pumpkinhead rips off heads, tears out spines, opens up chests, crushes skulls and so forth (this is the only one where you see him actually kicking some arse- even though it does look like his victims are forming an orderly queue), and this is the film with the single nastiest scene of the series- a man has to cut his own leg off to get out of a bear trap. Ouch. The effects in this are all practical and all good- with one in particular (the spine removal that showers the camera with blood) being spectacular. The other redeeming feature is the score- it’s a flagrant rip off of The Terminator (at least I think it is) and is both atmospheric and effective. 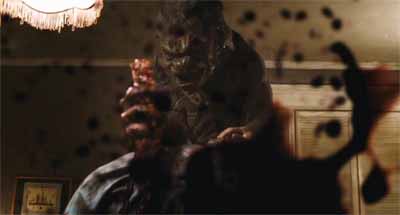 Overall, I do not rate this at all, it’s crap, actually and a depressingly lacklustre way to end the series. This is a monumentally ill-conceived attempt to force a story that does not work into a series not designed for it. Even were the acting, writing and the rest top-notch (which they certainly aren’t) this would still fail by duty of the clichéd and irritating central narrative. Purely for the carnage and the score I give this film 1.5 Changs.

As for the series as a whole: well, it’s patchy. The first one is great fun, and thoroughly enjoyable, the second is shit, the third is surprisingly acceptable and the last is pretty mediocre to shit. So, as a series, I give Pumpkinhead a completely in the middle 2 Changs- 2 films worth watching out of 4 is about as average as it gets.

I’m thinking about Children of the Corn next, but don’t hold out a lot of hope for it.