I’ve been waiting for this all my life 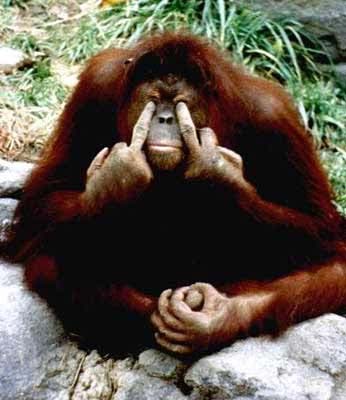 Jarv’s Rating: It’s the double eye poke fuck you Orangutan of Doom for this shit. Fuck this film, fuck every cunt involved in this. Fuck Brain Damage films, fuck Len Kabasinski. This film is utter fucking shite and managed something that we all claimed to be the fucking impossible.

Dearly beloved, I stand before my fellow believers on this sombre day with some terrible news. Before we take a moment of silence to mourn the passing of happier days, I would like you all to join me in a moment of prayer, where we shall ask our gods to visit these Brain Damage motherfuckers with great vengeance and furious wrath for their transgressions against cinema, and don’t hold back on the wailing and gnashing of teeth. For these cunts, and this Len Kabasinski cunt in particular, have managed to not only offend your holy name, but to rend our dreams asunder and shake one of the key tenets of our beloved church. The 29th September 2007 shall forever be a day that lives in infamy for us Changians, for it was on that day that the heresy of Fist of the Vampire first received a release.

What have they done that is so terrible? Consider that I will sit through almost anything, so for me to have hit my limit it must be pretty bad. Well, I can’t believe I’m about to write this, so please allow me a moment to compose myself.

These useless, talentless cunts have managed the impossible. Are you ready for this? The writer, director, cunt in chief, one Len Kabasinski, has managed to craft a film so woefully inept that he made lesbianism boring. That’s right, this is the only film I’ve ever seen that isn’t redeemed by utterly gratuitous acts of lesbianage.

Rather than just rant for 1000 words about this fucking travesty, I suppose I should explain what Fist of the Vampire is actually about. The film opens in 1977 with a family being slaughtered by 3 vampires. I actually took 4 attempts to make it past this scene, as it’s filmed in some dreadful grainy psuedo-grindhouse style and is actually almost completely unwatchable. Furthermore, this is the first instance of lousy CGI in the film (this time it’s fire). It’s really, really fucking horrible stuff. Anyhow, the film cuts to Supercop (Lee) played with all the charisma of a small root vegetable by Brian Anthony,  kicking some ass. He’s busted in on a drug factory and is shooting cunts all over the place with his magic gun that never requires reloading. There’s mucho claret thrown around here, except it’s all CGI and terrible, and even worse the fucking muzzle flares are CGI. What sort of cunt would think that was a good idea? Oh, and Lee gets to beat up a woman for a bit in a decision made in a complete taste bypass. Thankfully, it’s not so grainy now, but instead we’ve got idiotic camera angles, stupid slo-mo and cuntish over-editing. You really can’t make out what’s going on.

Anyhow, for reasons too boring and cuntish to go into, Lee joins the DEA and goes undercover at some stupid and cuntish fight club run by Nicholas, the fat vampire, played with complete absence of talent by Brian “Blue Meanie” Heffron, allegedly a wrestling superstar (except if he’s a wrestling superstar then I’m in line to be Poet fucking Laureate). He’s a fat cunt, with a cuntish beard and a cuntish outlook. Anyhow, Lee teams up with Cheyenne King’s undercover cop and they clean the place out. Lee, apparently, was the survivor of the initial murders. As if I care. As if it matters.

As you may have gathered this film is terrible. The acting is uniformly atrocious. Darian Caine may be the veteran of about 1000 soft core filth offerings, but on the evidence of this was by far the most talented person  involved. Anthony, in particular, has all the charisma of a tin of baked beans. His Lee is a complete and utter plank with the emotional range of a blow up sex doll. However, worst of the lot is the fat beardy cunt that appears from nowhere to play the drug dealer. The cunt has clearly modeled his performance on Gary Oldman in True Romance, except without a single modicum of the talent necessary to pull it off. Honestly, when this cunt is on screen it’s almost a preferable option to bang a knitting needle through your ear to end the pain.

As will also no doubt come as a massive shock, the writing is also terrible (once again, that’s something that that cunt Len is directly responsible for). Events just occur for no apparent reason and with no apparent consequences, like for example, Caine’s feeding scene. Nicholas and Reno turn up at her place and find it full of naked vampire chicks with her sitting with another chick in a bath full of blood. Nicholas is, unsurprisingly, pissed at this one, and lectures her about if she must feed she has to “Clean her plate” (HAR DE FUCKING HAR, CUNT). Then they bugger off.  There’s no mention of the fucking army of semi-naked/ completely naked lesbian vampires left behind. There also isn’t a single memorable line in the film. Utter shit.

Seriously, can any cunt make out what the fuck is going on here?

Then there’s the cinematography. It’s fucking terrible. Most of the time the camera is either too low, too high, or moved in a jerky way. Furthermore, it looks like shit (the nylon filter mentioned above) and it’s damned hard to make out what the fuck is going on. As if that wasn’t irritating enough the fight scenes (allegedly all involving people that can actually fight properly) are fucking terrible. The combatants move with the speed of a slug slithering through treacle, and you can clearly see missed blows and the rest of it.

Then there’s the sound. Fuck me. The score is all over the fucking place, with a combination of grating techno, the aforementioned faux-Evenescence drivel and some god awful theme song that sounds as if Kabasinski went out of his fucking way to find the least talented Slipknot tribute band spawned from a flyover state basement. Like Slipknot themselves, actually. As if that isn’t insulting and shit enough, there’s also terrible folio work. Gunshots don’t match up to muzzle flares and in one interminable scene at the beach all you can hear is the sound of the waves because some silly cunt stood in the wrong place with the mike and no other cunt noticed. Woeful.

This all sounds insulting and obnoxious, doesn’t it? But believe it or not, I’m not done. There was clearly a budget of some sort involved in this (not a  big one) and Kabasinski decided to wax the whole fucking lot on dreadful CGI. The vampire death effects are horribly bad, but they look like Avatar compared to the simply awful CGI gunshots, CGI blood and CGI fire. There’s a CGI overload in this sack of crap that makes me actively angry. It wouldn’t have been less shit with practical effects, but it might not have been as cuntish.

Overall, this film is complete and utter fucking shit. I am actively angry at this toss, because I enjoy rooting around through schlock, and because of this I’m now a bit trepiditious about venturing back into the vault. Thank you very, very fucking much, cunts. Avoid this shit.

As a final note, interestingly this is my second stab at this review. I wrote it once, and almost as if Moonwolves itself was actively offended at it, when I hit publish, it did nothing of the sort and in fact deleted the first effort. So I’ve had to redo it. Needless to say, for a film as shit, obnoxious and downright cuntish as this one, I can’t say I blame the site.

159 responses to “Jarv’s Schlock Vault: Fist of the Vampire”