I have no rational explanation for it. Maybe I simply like subjecting myself to garbage. Let me explain. I rattled through a whole bunch of Arnies early works with relish. They nearly all sucked (‘The Terminator’ being the obvious exception), and when I finally got to the good stuff I did a Keyser Soze (otherwise known as “pulling a Frankie”). But here I am, back with what is easily one of my favourite Arnie flicks, ‘Commando’.

Be warned! I’ve gone apeshit with the pics! 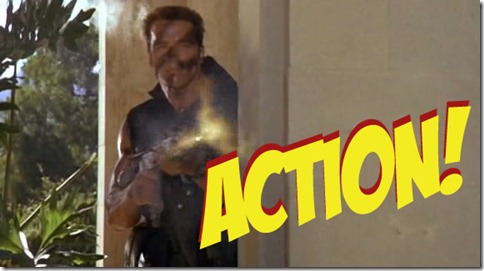 John Matrix (Arnie) is an ex-special forces Army killing machine living a happy life with his daughter Jenny (Alyssa Milano, cute as a button) in a photogenic house in the mountains. But all is not quite as tranquil as it seems, despite all the log carrying, fishing and ruffhousing. Jenny is kidnapped by his old unit, led by a clearly homosexual, mesh vest wearing British bloke named Bennett (Vernon Wells). The kidnapping, under the behest of a ridiculously non-South American dictator (Dan Hedaya), understandably irritates Matrix, and with the help of a plucky stewardess (Rae Dawn Chong), the only way to save Jenny is to punch, kick, stab, shoot and explode as many extras as the filmmakers can reasonably fit into an 85 minute movie. 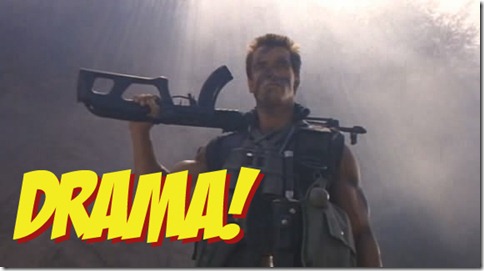 I’ll get this out of the way. I love this movie. If there ever was a Dumbhouse Hall of Fame (and there should be), I’d nominate ‘Commando’ for top honours. This is what all dumbhouse movies should aspire to. Nearly every line of dialogue is quotable, the action is completely silly and cartoonish, it rattles along at breakneck speed, it’s ceaselessly entertaining (I’ve probably seen it 20 times) and before you know it, Bennett has a steam pipe sticking out of his chest and Arnie’s delivering one of his many hilarious lines.

Clearly, this is a ridiculous film. But it’s made with such good humour (despite the epic death count) that it’s pointless picking out it’s faults (except to have a bit of a laugh). The script, written by Steven de Souza, is a brilliant collection of one liners, and pretty much all the major players get a classic or two. Of course there’s Arnie’s classics, as when he tells a soldier that he has the advantage because he’s “downwind”, or when he’s on the plane, running to the bathroom because he’s “airsick”, even though the plane hasn’t taken off, but there’s also the General being asked “What are you expecting?", and responding "World War III”.

Special mention must go to Rae Dawn Chong who provides many of the films best lines, as when she’s witnessing Arnie and Bill Duke going toe to toe, and exclaiming “I can’t believe this macho bullshit!” and “These guys eat too much red meat!” And when Arnie bludgeons some poor security guard, she quips “Did anybody ever tell you that you have a lot of hostility?” And what’s even better is that for most of her screen time she isn’t just along for the ride. She’s an important part of Arnies success, breaking him out of police custody, courtesy of a handy rocket launcher (“I read the instructions”) and she’s an amateur pilot as well.

Arnie is in terrific form here. He clearly knows this is ridiculous, and as such plays up the comedic elements of the character. He’s virtually indestructible, shrugging off bullet wounds and hand grenades whilst delivering classic one liners. Just look at the scene where he runs down Sully (David Patrick Kelly), and hangs him off the side off a cliff, taunting him with “This is my weak arm”, and “You know when I told you I’d kill you last? I lied!” before dropping him to his doom. But the genius doesn’t end there. When asked “What did you do with Sully?” he replies (in all seriousness) “I let him go.”

It’s interesting to note that a sequel was written by de Souza and Frank Darabont. But due to Arnies disinterest the script was reworked and resulted in the classic we all know and love, ‘Die Hard’. The mind boggles at the thought of Arnie battling terrorists in a high rise. I mean, how could he possibly worm his way through the ventilation ducts? “Come out to LA, we’ll have a few laughs… Uh… Hans? Hans, I’m stuck. Little help here?”

The direction, by Mark L. Lester (Firestarter, Showdown in Little Tokyo), is simultaneously brilliant and inept. Many stunts are obvious and footage is repeated, but he has a genuine comic timing that suits the material to a tee. And the music, by James Horner, adds to the enjoyment. It’s a calypso rhythm that feels both out of place and essential. As you can probably tell, there are many elements of the film that shouldn’t, in theory, work, but do.

If, for some reason, you haven’t seen ‘Commando’, I can’t recommend it enough. I first saw it when I was about 10, when my dad used to rent me all the new Arnie movies. It’s violent, but not gory, and it is made with such good humour that it’s simply a terrifically entertaining way to spend an hour and a half. So grab your beer and pizza and let off some steam.

The World According to Arnie: