The Floater in the Bowl: Candyman 3 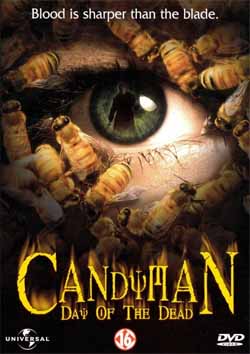 What a shitty way to finish this trilogy. I’ve actually struggled to write this review, because my first draft contained a record usage of the word cunt, even outstripping my previous best in Demon Cop with a simply mindboggling 42 usages. And it wasn’t funny. So this, my second attempt, will be a slightly less insane rant, and a slightly more considered look at the merits, or severe lack of said merits, of Candyman 3: Day of the Dead.

I’m starting to think that the monkey is right. Every horror series, whether trilogy or longer ends with an absolute stinker (honourable exception: Child’s Play- it got its stinker out of they way early). Even the mighty Leprechaun series finished with an absolute turkey of a film. To be absolutely honest, after the utterly middling Candyman 2, I didn’t have a huge amount of hope for this. My expectations were raised slightly by the appearance of a Playboy model- usually a surefire guarantee of massive amounts of surgically sculpted boob, but they were wrecked completely when I read that the Candyman himself, Tony Todd, reckons this is the worst film he’s ever been in. He’s wrong. Minotaur is, but that isn’t a recommendation for this. Still, I girdled my loins, poured a preparatory beer and rolled a medicative spliff and put it on.

Within three seconds of the film starting my already below sea-line levels of expectation had plummeted to depths usually associated with the bottom of the Mariana Trench. For some fucking reason, the makers of this stinker decided to completely ignore parts one and two and transplant the film to LA. While I can understand ignoring part 2, because it ain’t great, Part 1 is the good one. Surely if you’re making a second sequel, a good place to look for inspiration would be in the successful film of the series? Anyway, that’s what the makers did. To be fair, about 5 seconds in my hopes did climb off the bottom of the Pacific Ocean because of this:

Huzzah! Surely this is indicative of an actress about to spend the majority of the film in a state best described as “nakedness”, but no, the film was cockteasing. For some reason, and I don’t really understand why, this is Caroline. She’s the direct descendant of Robitaille, and the last of the family to own the Candyman’s paintings. I can, actually, see why he got lynched- he’s a crap artist and clearly had it coming. I haven’t seen more pathetic attempts at fake art in a movie since Burton’s Batman. Anyhoo, Caroline thinks that she’s got an undiscovered genius on her hands. She doesn’t, but that doesn’t stop her organising an exhibition of his dismal chocolate box art. At the exhibition, she says “Candyman” 5 times, and unleashes the ghost. The rest of the film is too tedious to go into- except it does turn out that he has a congregation, and the way you deal with him this time is to destroy the painting. The film finishes with her framing an asshole cop for the murders “to break the curse”. Which is a bit harsh considering the fact that although he was an asshole, he probably wasn’t killing people with supernatural honey bees or a big hook. 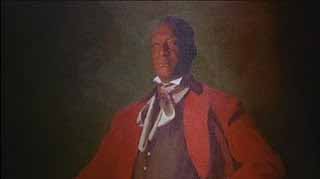 America's entrant in the 1999 Turner prize

The acting in this film is utterly hopeless. D’Errico was, aside from getting them out for Playboy, also in Baywatch, so as is to be expected can’t act. Tony Todd looks like he’d rather be anywhere other than in this dogshit, and the rest of the supporting cast aren’t worth a mention- aside from a strange cameo from one of the original actors in Nightmare on Elm St (which would also be a series to finish on one of it’s better entries were it not for the remake- which I haven’t seen, but will bet is shit, and Freddy v Jason). Good to see that Hollywood hasn’t completely forgotten him, although I do suspect that his most recent appearance on a screen is CCTV footage of him shoplifting in a 7-11.

This film makes a number of basic mistakes. The first is that they kept the weird and icky incest subplot from the previous film, except in a blazingly unsubtle scene actually show Caroline getting it on with the Candyman. In the past, that is, or it may be a dream, but I was beyond caring. Furthermore, it’s mind and arse numbing stuff. I was watching it on my comfy sofa and I still felt the onset of cinema seat dead legs. Finally, they dispensed with the Phillip Glass score. Why do this? fuck’s sake, the score was one of the most memorable and atmospheric scores of the 90’s. 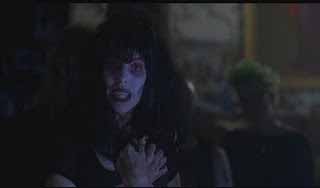 The congregation: not scary, not clever, just shit

Having said that, it isn’t completely worthless. The Candyman kills lots of people in entertaining ways, and there is a simply staggering amount of boob on display. I think, and only a rewatch could confirm this, that D’Errico is the only woman in the film that actually keeps her top on. Random passers by show the goods, it’s that gratuitous. Alright, this is a bit of an exaggeration, but not by much. I do have to note, though, that they aren’t particularly good boobs, so even this crumb of comfort isn’t really worth anything.

Overall, I have to say that I don’t recommend this film. It’s shit, and to paraphrase a monkey it doesn’t just mug you with boredom, but steals your car and then goes off to ram-raid a shop that sells nothing but boredom. Basically, it’s another damp squib at the end of a series, and it’s a shame that after the stellar part 1 and the mediocre part 2 they couldn’t find a passable way to send the hook handed sociopath off. I actually hope someone returns to Candyman, ignores the idiotic time-traveling incest plot and returns it to its ghost story roots. 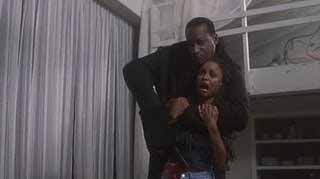 I give Candyman 3: Day of the Dead half a Chang, and that is only for its dedication to gratuitous nudity. If Donna had unleashed the fun bags I may have been persuaded to raise this to 1 Chang. Other than that, though, this is a worthless and terrible film, and really, if I want to see ludicrous amounts of breasts I can always watch Species again.

Any suggestions for horror movie series (that aren’t Halloween)would be welcome, as at the moment I’m considering doing the Poltergeist trilogy, but I do like a challenge, and I have quite enjoyed doing this.

Tags: Candyman, Complete and utter shit, Donna D'Errico, Gratuitous boob, Hook Handed Stabbery, Tony Todd, weird and icky intergenerational incest, what's the fucking point of casting a playboy model and then she's the only actress in the film to keep her top on?

17 responses to “The Floater in the Bowl: Candyman 3”