I now return to the Cronenberg series after what feels like an eternity and I can’t say I’m taking much pleasure from the next few films. Naked Lunch is the starting point for “the second shit period” and although it isn’t as bad as I remembered it being, I can’t say that I actually enjoyed watching it.

Naked Lunch follows the adventures of exterminator Bill Lee, who becomes addicted to the powder he uses to kill cockroaches, shoots his wife in the head, moves to Interzone (flagrantly Tangiers in the 50’s) and becomes a sort of writer. His encounters are completely and utterly bizarre, featuring talking insect typewriters, homosexual Mugwumps, and a completely and utterly surreal American couple.

If that brief synopsis sounds fragmented, well, that’s because it is. Naked Lunch is a novel that was frequently described as unfilmable. This is, I’m sorry to say, absolutely true, as what we have here is not Naked Lunch. Without boring on too severely about the history of the book, the reason it is unfilmable is intrinsic to the novel. William Burroughs was a serious heroin user with homosexual tendencies. He was resident in a gay brothel in Tangiers and fucked out of his mind. Whilst high, he scribbled fragments of random thoughts on paper, which were then assembled at a later date by Beat Poet Allan Ginsberg. As a result, Naked Lunch is not so much a novel, rather it is a series of completely unconnected but compelling passages that touch upon the themes important to Burroughs.

Cronenberg was never going to be able to film this- it’s impossible. Instead, and this isn’t a bad idea, he filmed what he called “a response” to the novel. The film Naked Lunch contains a few set pieces from the book (the mugwump buggering the young boy to death, Lee’s employment, Dr. Benway and so forth), but interlaced it with characters and events from Burroughs life. For example, 2 minor characters are clearly modelled on Ginsberg and Jack Kerouac, the American ex-patriots are based on Paul Bowles, author of The Sheltering Sky, and his wife Jane and the “William Tell” scene is straight from Burroughs biography, although he was never tried for murder. 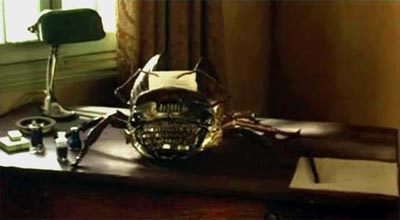 If I am honest, then I’ll try to review the film on its own merits- and the first one is that the casting and acting are top-notch. Peter Weller plays Lee, and is superb as the man gradually descending into the very depths of insanity and addiction. He’s ably supported by Roy Scheider, Ian Holm and Julian Sands and all the acting in this film is really first-rate. Judy Davis is also excellent in a demanding dual role, putting in a convincingly grimy performance.

Secondly, the creature effects on the typewriter bugs with weird orifice-like mouths all look sufficiently creepy and are all well done. Clark Nova (Lee’s controller), the most realised of the bugs, is extremely well designed and operated. Other effects, particularly the mugwumps, aren’t anywhere near as good, but credit where it’s due. 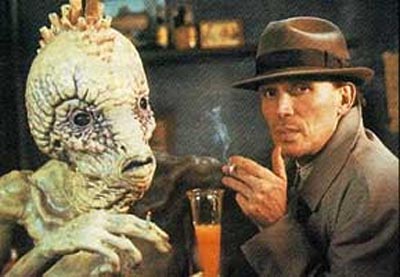 Thirdly, there is a dry comedy operating throughout the film (Lee’s explanation of his new typewriter as “dispensing two types of intoxicating fluid when you write something good” is genuinely witty). This is, funnily enough, appropriate to the novel as it laces scabrous satire with some very funny jokes (AJ and the baboon), and Cronenberg does as good a job as is possible of translating Burroughs sardonic humour to the screen.

However, that doesn’t mean that Naked Lunch is an entirely successful film. Cronenberg made several terrible decisions that directly impact on my enjoyment. Firstly, and by far the most important, is that Naked Lunch is a novel that I really like, however, that doesn’t mean that I want to see entire passages of it narrated on-screen. There are several interminable scenes where the Ginsberg character reads out a passage straight from the novel, and Lee himself tells two lengthy anecdotes that come straight off the page, and weirdly result in a jarring atonal laughter from the other characters. The problem here is that it is weird, and more than a little boring, listening to the lengthy story of the man who’s arsehole learned to talk. It’s also lazy, which is incongruous given how much effort was clearly put into the attempt at a coherent film.

Secondly, although it does deal with Burroughs’ themes of addiction etc, it feels deeply unsatisfactory and more than a little bit pretentious. The ending is completely and utterly anticlimactic, nonsensical and frustrating. Upon reflection, it’s arguable that the film could only end the way it does, however, why introduce the idea of Annexia at this late stage? All that serves to do is remind me on how much they chose to omit from the film.

To add to the jarring and pretentious atmosphere of the film, Howard Shore’s score is a dreadful atonal jazz number, that while appropriate for a work based on one of the pivotal figures of the Beat generation, simply adds to the sense of “what the fuck am I watching, and why am I watching it?” It’s basically everything a score shouldn’t be: intrusive, distracting, irritating and overpowering. Personally, I’m not an experimental Jazz fan at the best of times, but the score to Naked Lunch pushed me into agreement with Roddy Doyle that Jazz is little more than “musical wanking”.

Overall, do I recommend Naked Lunch? This is a tough one, as I can’t wholeheartedly say I do. This is a film that I want to like as I love the novel and love the director, but it’s one that I just don’t. I do, I have to say, admire the work and sheer effort that it took to get this film to the screen, but in all honesty I just consider Naked Lunch to be a failure and am reluctantly forced to agree with those that said the novel should not, and could not, be adapted to the screen. I rate a sterling attempt at an impossible task with a deeply disappointed 1.5 Changs out of 4.