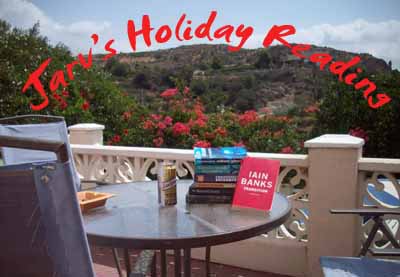 Hola. As some of you poor work-bound schmucks may appreciate, I’ve spent the better part of the last 3 weeks sitting on my ass in the sun, drinking quite unreasonable amounts of beer and not doing much in particular other than that. So, what I’ve decided to do, in want of any better idea, is to mini-review the various books that I’ve read during this time. Some of these I’ve read before and left in Spain, some of them I read for the first time. There’s no real pattern to this, I just read what I fancied, and there’s no real order to these books.

So, with no further ado:

I see the word “seminal” bandied about a lot talking about this book, and I suppose to be fair, it is hugely influential- with films like The Matrix owing a hell of a lot to Gibson’s 1984 dystopian novel. However, having said that, it isn’t actually very good. It’s OK, sure, but for the life of me I cannot see how it managed to capture the zeitgeist in the way that it did. Maybe I’m being dense, but I don’t think so because Mrs. Jarv abandoned it half way through muttering about “complete shit” and “life’s too short for this”. Anyhoo, Neuromancer is about a hacker (jockey) called Case who is hired to crack an Artificial intelligence by the enigmatic Armitage. It also features Razorgirl Molly and sociopath Riviera. In reality, however, the novel is frequently uninteresting and confusing, with the eventual Straylight heist in particular being almost unreadable garbage. Not the worst book that I’ve ever read, but not one that I’m going to come back to and certainly not one as good or as important as it is made out to be. Brave New World this is not.

Natali is filming this next, and this has the enormous potential to be absolutely awful on the screen. The entire Matrix sequences (of which there are a lot) read like the bastard lovechild of Tron, and anyway have already been done, and I dread to think what Natali will do with the eventual confrontation between Case and Neuromancer itself.

However, compared to this utter crap, Neuromancer does in fact look as good as the aforementioned Brave New World. This is not the worst book I read on holiday, but it’s damned close. Nevertheless, it is the novel that guarantees that I’m never going to read another book by Gibson.

Virtual Light follows the story of Chev, a bike courier, who steals a pair of sunglasses that contain the plans for a new San Fransisco. She’s chased by Rydell, an ex-police officer, and they predictably join forces to blow the lid of the whole conspiracy. Except, the thing is, I can’t understand why these sunglasses are such a big deal- they don’t seem to be illegal, being as it looks like legitimate plans to redevelop San Fransisco. Really, this is Neuromancer-lite without the groundbreaking aspects of Neuromancer.

Furthermore, the book is punctuated with interminable interruptions from some old fuck called Skinner talking about life living on the bridges over the bay. Which is understandable, seeing as it was originally a short story called Skinner’s Room, but that doesn’t make it any more interesting.

Jarv’s Rating: Half a Chang– It was probably quite a good short story, and should have stayed as one.

I like Neil Gaiman novels, loved American Gods in fact, but Neverwhere didn’t really work for me.

It’s about this hopeless douchebag who gets sucked into a parallel London (London Beneath) to aid Door, Hunter, the Maquis and a few other memorable characters in a quest and avoid the attentions of the magnificently drawn Mr. Croup and Mr. Vandemar.

There are some fantastic touches of imagination, such as the Black Friars and the Ordeal, and there are some very funny jokes but as a whole I have to say that it just didn’t really work for me. I’d be giving it 2 changs ordinarily, but as a completely futile complaint, It’s getting the Orangutan of Doom for the following reason:

This is the second time I’ve taken one of these “Author’s preferred editions” to Spain on holiday, and this is the second fucking time that the physical book has not been up to the job- the fucking glue has melted. This is staggeringly annoying, and it completely kills my enjoyment of the book to be reading individual pages and then attempting to reassemble them. Furthermore, I can’t read it at the fucking beach, as the slightest gust of wind takes the pages and scatters them all over the fucking place. This is simply unacceptable, and annoys me so intensely that for this book Jarv’s Rating is a petulant and stroppy double eye-poke fuck you Orangutan of Doom.

0 Changs: The Orangutan of Doom

This is more like it. I’ve always, for the most part, enjoyed Brookmyre’s novels, being as they are frequently funny, spiky, imaginative Crime fiction.

Pandaemonium is Brookmyre’s first real attempt at Sci-Fi and I suppose it’s quite good if you’ve never read another Brookmyre novel. The story follows the disastrous school trip of a group of Glaswegien neds as they come into contact with the forces of hell.

The pupils are the undoubted stars of the novel, an accurate drawn and frequently hilarious mob of little scrotes. However, as is the case with Brookmyre, the plot is really an excuse for him to have satirical digs at his pet targets (usually organised religion) and this is no exception. It’s a disjointed book, but the more violent demon fighting aspects (and the science in particular that opened the portal) don’t really work.

The real flaw of the novel, though, is that it reads like a “best of” Brookmyre. The flame thrower improvised from a pesticide dispenser is straight from Be My Enemy, for example, and the narrative device of a HUD from a first person shooter was already done much better in A Big Boy Did It and Ran Away. This is annoying and suggests that Brookmyre needs to take a wee break for a while, as he’s rehashing his own material here.

Nevertheless, Pandaemonium is more than worth a read for the antics of the pupils- who are very, very funny and completely plausible. It’s  big, bold, violent and laugh-out-loud funny on occasion.

Jarv’s Rating: 2 Changs– If you’ve never read another Brookmyre, then it’s a good place to start, but if you’ve read all of them, like me, then it’s very missable.

Iain Banks is another author that I’ve followed for decades. I did, however, eventually completely run out of patience with him after the woefully shit and pretentious Song of Stone.

However, I’m ecstatic to announce that Transition represents a real return to form for him. This is a big fucking book, full of complex ideas and genuine comic touches. The characters are well drawn and the story is never less than completely engrossing.

I’m not going to attempt to distill the plot, as it’s massively complicated, instead, I’m going to talk about the writing. Transition is narrated by several different distinct voices telling seemingly unrelated stories that link together in the gripping climax of the novel. There’s the Transitionary, unstoppable killing machine Temudjin Oh, the Patient, the Philosopher, Adrian and other voices. The individual narrators are deftly done, and although all seem to be telling unrelated stories I didn’t once feel a need to scan over the sections to get back to the main narrative. This really is accomplished stuff.

Transition is a very, very good book and while not up there with his masterpieces such as The Wasp Factory, it can hold its head up high as being the first of his books that I’ve read in a long time that hasn’t aggravated me, and the first one since Whit that I’d actually recommend.

Righto, that’s part one done with. I shall return tomorrow with some lewdness from Tom Sharpe, and probably my favourite book ever.