Oh it’s been a treacherous, unnerving journey thus far. As I burrow into the belly of the beast that is generic Hollywood comedic trash. Read as I forgo all rationale/critical/analytic thought and watch the dumbest junk imaginable in desperate hopes of finding some gem amongst all this filth. My travels may be fruitless and bare no such a find, but just like Lewis and Clark before me the journey must be made for those who will come after me. Join me as I conquer this most recent beast ‘Dinner For Schmucks’.

Initially entitled ‘Dinner For Idiots’ this blasé remake of ‘The Dinner Game’ is utterly pointless and contemptuous in nature. ‘The Dinner Game’ is a quaint little comedy, tightly structured and reined in enough as to not veer off into nonsense as this remake does quite often. Such is the nature of a Francis Veber film, his movies have been remade by Hollywood for so long one wonders if he only continues to make films just so they can be remade (the next remake ‘The Valet’ drops in 2012). Schmucks for the most part is a decent little remake, in fact had they stuck to the original more it would not be that bad of a movie I could have recommended renting it. The simple premise of the original in typical Hollywood style needs to be upsized for American audiences; the way this movie ends is the comedic equivalent to adding in more explosions in an Action film.

This is about as interesting as it gets.

The trailer does a decent job setting up the gist of the film. Tim (Rudd) is trying to get ahead in his company, his boss (Greenwood) is a prick (but not a big enough of a prick to buy that he would like this sort of thing) who likes to have all his higher ups over for dinner in which they bring an idiot friend along and they all sit around and laugh at them. Tim at first objects to the thought because his girlfriend thinks it is too mean. Then Tim literally runs into Berry (Carell) and he is too good of a schmuck to pass up, so he befriends him in hopes of going to the dinner. Berry shows up to Tim’s house a day early and begins to ruin his life. In the end they realize they love each other and become best friends despite the messed up stuff they had done to each other over the course of a day.


It is sort of sad this movie was not any better, I blame that squarely on the script and director. Paul Rudd is decent in this mainly because he’s not forced to bare the heavy lifting and since he is such a delicate flower being the comedic heavy in a film has never been Rudd’s strong point. No he plays the straight man to Carell’s ever so happy with whatever life throws at him bumbling schmuck. Carell is very good in this film, he is the only aspect that I think is stronger then the original. Maybe it’s a difference in taste of comedy but that fat French dude who played the idiot in ‘The Dinner Game’ looked like he smelled to bad to feel sorry for, unlike Carell. While the trailer suggest otherwise, Carell is not overly annoying, at the same time he is almost just too endearing and heart warming that you wonder how anyone can feel bad for him. His child like innocence and glee make it impossible for him to despise, an aspect Rudd plays off well. If you are a Steve Carell fan then this movie does not disappoint, there are a few clunkers along the way for Steve but he comes off looking good in the more terrible aspects of this movie.


The other aspect of this movie that is funny is, Jemaine Clement as Kieran. He plays the artist who Tim’s curator girlfriend is working with. The main thing Berry gets Tim in trouble with is Tim losing his relationship with his girlfriend and Tim fears that she will flee with Kieran. I never bought that, the actress who played Tim’s girlfriend seemed too uptight to fall for Kieran’s tricks. Never the less Jemaine Clement is just funny. He could probably read the bible and I’d be laughing the whole time. His role is good though, because he does not play the typical douche bag artist like everyone else. Sure he’s weird and uptight but he’s also a nice guy. As is the case with everyone in this movie, they are all nice guys. There was meanness to Tim’s character in the French version that is missing here. 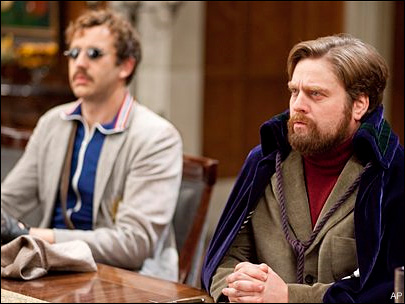 HEY thanks for making it easy to point out the worst parts of the movie!

ONTO THE TERRIBLE!!! This is why you read this is it not? That picture sums it up nicely Zach Galifianakis sitting next to that guy who was the blind fencer and they are at the dinner. So if you did not like ‘The Hangover’ get ready to further your belief that Zach Galifianakis is not funny, I myself really enjoyed ‘The Hangover’ and don’t mind Zach Galifianakis but he was just awful in this movie. Firstly he’s stuck with all the terrible parts and he plays them with that same gusto for zaniness as he always does. Zach Galifianakis is just a weirdo, I’ve seen a bunch of his stuff and he is typically the same guy in all of it, while Steve Carell is usually the aloof sweet man he at least can play it to varying degrees. Zach only has one, this pompous I’m a weirdo I’m here get used to it attitude. It just does not work here, its hard to tell if it was his performance or the script but whenever he is on screen it brings the movie down.


Another terrible aspect is the non use of David Walliams (the best thing Britain’s given us since…Queen?). I really like David Walliams, and his mild role is ok, just sort of there could’ve been done by anyone.

Finally the dinner scene itself. The original doesn’t go there, so OFcourse the American remake had to go there didn’t you. It’s about as bad as it seems, just a string of lame gags by d-level comedians, it was such nonsense. This is where the director and script writers failed; I can’t blame the editor because something tells me Jay Roach is big enough that he gets final say. This scene should have been scrapped. There was no need for it; Bruce Greenwood played his role too nice to need to be taught a lesson at the end as well. It just reeks of over excessiveness and comedy aiming for the blandest possible denominator. It was all going swimmingly up until that, or course it’s the one original aspect they have put into the movie and it fails miserably. I’ve never seen a movie collapse so hard and so fast, there were signs of it with Galifianakis role who “steals” the dinner scene (and it’s not a scene you want to steal). Also the movie is even given an out to not go to the dinner, yet it cuts and bang they are at the dinner, like it was a last minute decision to actually include the dinner in the film.


In the end we are left with a light hearted comedic romp that is no better then the original. If you still see movies with your parents or grand parents, go take them to see this as they will enjoy it and you won’t utterly hate it (minus the dinner aspect) and then they will take you out for ice cream afterward. They will probably love it since old people don’t watch TV and movies as much and tire of silly child comedic styling’s. The blandness and easy gags of ‘Dinner For Schmucks’ will make them smile. BUT if your parents are into movies like you, then do yourself a favor and rent the original instead, you’ll still probably get ice cream.

1 Jeff Dunham is no Terry Fator out of 4