I was lucky enough to grow up in the time before the internet. I lived surrounded by forests and mountains. Each day growing up was a day spent exploring. Each discovery felt important, each step filled with the importance that childhood can bring to it. The days seemed as long as my shadow on the grass at noon. And at night, with the windows open, I’d listen to the songs of the crickets, the sweet whisper of the wind through the fields, and I count the stars until I fell asleep. TV at the time wasn’t important, it was my friends, and the tantalizing thought of what lay beyond that next hill.

I’m not sure how many children these days in this media saturated world can say they have the same experience. Friends are on Facebook, outdoor time is spent from the car to the front door. Stand by Me captures what was beautiful and overwhelming about growing up. It may not be a perfect film, but it’s about as good as anything I’ve ever seen about growing up. It’s almost frightening how close I can parallel similar experiences with my friends, my own feelings, at that time in my life. What the movie does right is not paint a perfect picture. It’s the whole ‘Norman Rockwell is bleeding” look at nostalgia. Life at once seems idlyic and yet terrible.

First, the movie understands what it’s like to be a boy, in that fragile state between wanting to be a kid and wanting to grow up. The cursing, the budding sexuality, the feeling of being a without a voice in the face of all knowing adults. Boys at that age shoot the shit, but they talk about it as if it’s the most important conversation that they will ever have. Discovering the world and yourself is a feeling that we never really get back, we don’t even know it when it happens, but somewhere there is a change from child, to young adult, and the implications it brings can do more than we can handle.

Gordie, Chris, Teddy, and Vern could be any group of friends. We recognize them instantly. They are all different and yet we know why they are friends. We had that group growing up. They set out on what is at first an adventure to find a dead body of a boy close to their age. It’s almost a symbol of the death of their innocense. There are so many wonderful scenes in this movie but I’d like to pinpoint a few for this review. 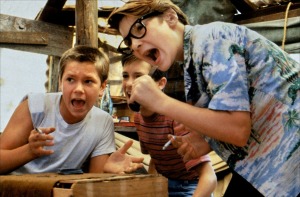 First is the scene that takes place in the treehouse at the start of the film. This scene sticks out to me because it’s just a bunch of friends who are all comfortable with each other and their place in the world. Just listen to the dialouge in the scene. It’s not forced, it’s exactly how kids talk at that age. The constant picking on each other, the feeling of being par of something no matter how small. All these actors were just that age theirselves and they give what I would consider the best performances of any child actors and of their own individual careers.

Next is the scene between Gordie and Chris. Teddy and Vern had already fallen asleep and Chris and Gordie were on watch. River Pheonix gives such a powerful performance telling the story of how he had stolen money and tried to give it back to a teacher. She took it for herself, but knew that no one would believe him over a teacher, especially a kid like him, whose family had a bad reputation. You see this child, who is a good kid, who wants to have a different life from his family be so let down by someone in a position he should be able to trust, and it breaks your heart. He says “I just want to go to a place where no one knows me” and we all can relate. Growing into yourself is difficult and we’ve all wished, maybe even as adults, to start over, to be a clean slate and erase the pain from what we only know.

The last scene is the discovery of the body of the boy. The boys stumble upon it and it’s not sensationalized. The scene is played exactly as what it is. The true finite answer that none of us can escape the end. Whether we grow into it or it’s thrust upon us, we all will end at some point. And you can see it in their faces as they uncover the body. This is not joke, no adventure. It’s the cruel indifference of life. It’s the understanding that truly gets us. Childhood is not about ignorance but more optimism. We all saw a world we thought we could conquer. Small enough to hold it within our reach. But we grow old by understanding that we have no true control. We are all caught in the struggle to find our own way, to accept that we can’t go back once we’ve started down that road. 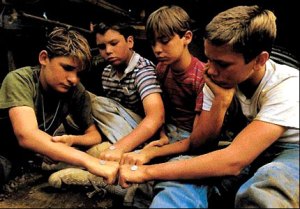 What this movie does is makes us step back to a time we so often forget. That time when we all saw things from new eyes. When everything was fresh and not tainted by the hurt and the pain of what’s to come. It can help you come to terms with your own life. To try to not take the small things for granted. We can never be children again, but at least we can take a step back once and awhile. Sometime, I’d like you all to take a look at the setting sun. Watch for the colors of the sky and put the stress of day to day life away. Look at it like it’s the first time. Appreciate it as if it were something we didn’t have the pleasure to see each day. Remember how when as children the only thing it meant was that the next day would be filled with adventure. If you haven’t seen this movie do yourself a favor and see it as soon as you can. And if possible, by yourself. You won’t be let down.

33 responses to “Kloipy’s Stephen King Series: Stand by Me”