Coscarelli swore he was never going to return to the Phantasm series, and he did, to be fair, keep his word for 9 years. Eventually, however, I suspect a pressing need to pay his mortgage had him return to the world of the Tall Man and his balls of steely death. Phantasm 2 continues the story, but is, I believe, an enormous improvement on the original, which I have to say is completely overrated. Reason being, Phantasm 2 was granted a $3m budget by Universal and as a result Coscarelli was subject to a massive amount of studio meddling. For the better.

Phantasm 2 opens with a recap of the events of Phantasm 1. For most horror films (I’m looking at you Nightmare on Elm St) this is annoying and unnecessary, however in this instance, it’s downright essential. Phantasm was such a confused mess, particularly the last act, that Coscarelli was actually doing the audience a service by distilling the events of part 1. Anyhoo, we pick up right where the original left off- Mike is being terrorised by the Tall Man and his Jawa army while Reggie is doing something or other downstairs. Luckily mike is able to escape as Reggie clobbers a midget with a baseball bat down a flight of stairs. For reasons never properly explained the undynamic duo blow up their house and escape. To be honest, I’m a bit uncertain about Reggie’s relationship with Mike- it’s far too Batman and Robin, really. Cut to 8 Years in the future and scrawny Mike has morphed into beefy James LeGros and has been sectioned for his own good. He’s now suffering from telepathic dreams (say what?) about some chick that the Tall Man is terrorising and manages to blag his way to release. Reggie picks him up, the Tall Man massacres Reggie’s family and our intrepid heroes engage on a Supernatural style road trip across post-apocalyptic America to rescue Liz (Paula Irvine). It all ends in a showdown in the Mausoleum, Reggie kills the Tall Man and our heroes escape. Or do they (Mwahahahaha)?

First of all, this is a lot better than Phantasm 1. It isn’t perfect, and it is damned schlocky, but all things considered Phantasm 2 is far more fun than its more esteemed big brother. Reggie is more prominent for one thing, there’s a boob count, it’s far more coherent, and there’s much more action as opposed to atmosphere. It may not have as many incredible visuals, and the best one of the lot is once again the mausoleum, but this is a minor quibble really.

There are so many great schlocky touches to this film: Reggie’s awesome quadruple barrelled shotgun, for example, or his and Mike’s Do It Yourself approach to home security (put grenade in can, tie pin to doorknob) that just are so much more fun than the po-faced original. Furthermore, if anything, it’s even gorier than its predecessor, with the Tall Man coming to a particularly messy end. However, the schlock factor of Phantasm 2 isn’t what elevates it above its roots. This time out, Coscarelli put some thought into the supporting cast, and fleshed out Reggie in particular. Reggie is an aging hippy ice-cream salesman with a heart of gold, a yellow streak and a need to shag any woman that will let him (this is particularly amusing in part 3). He’s brave when pushed into a corner, but other than that is a consummate coward. The nearest analogy to Reggie is the equally crap job holding Ash, although Reggie never quite hits those heights (he does give it a good stab though). Reggie is well played by Reggie Bannister, who has a neat line in puppy dog eyes, and it’s completely obvious that although Mike may ostensibly be the hero of the series, the real stars are Reggie Bannister and Angus Scrimm. Scrimm is, incidentally, on great form here- growling such utterly preposterous lines as “You played a good game, boy”, and exuding a real sense of menace. The female cast members are, unsurprisingly, crap and I’m doing them a service by not mentioning them by name. 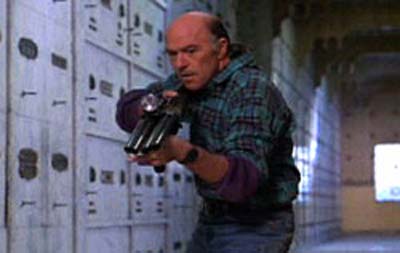 The makeup effects are vastly improved from the first film- the scalp peel at the climax is fucking disgusting, as is the zombified grandpa. The flying balls of doom have new tricks including steel-bollock-vision, and even the other dimension looks more accomplished than in the first film. The score, thank the Lord, is the original one, and once again sounds great. It’s hard really to criticise it on any of these levels. 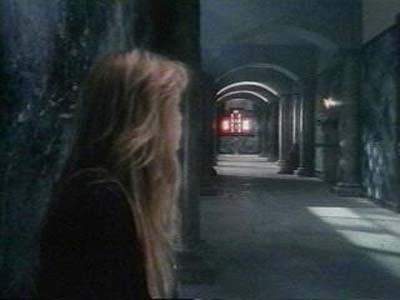 However, once again, it isn’t perfect. There are some massive plot holes and leaps of faith that the viewer has to make. For example, the Tall Man has devastated America and nobody seemed to notice. I know that Americans have a bad reputation for being dim, but surely, after the first few towns were slaughtered someone in authority would have noticed? If anything the flaw of the Phantasm series is in the writing- Coscarelli is a good director with a great eye for an image (the completely exhumed graveyard looks fantastic and is seriously creepy), but as a writer he just doesn’t cut it. If anything, he’s desperate for an editor or just someone to tell him that it doesn’t make fucking sense. This film is more than enough fun to get away with it, but the first one, and in particular the fourth, really, really fucking suffer because of his terrible penmanship. The studio did rein in his worst excesses (linear plot replaced dream like hallucination, all dream sequences were removed, etc.) but perhaps it could have been subject to a few more.

Overall, Phantasm 2 is a vast improvement on the original with loads of fun, loads of gore, some utterly gratuitous nakedness and some genuine comedy adding up to a film that may be schlocky but is more than worth a watch. I give it 3 Changs out of 4.

Having said that, though, I’m still completely bemused by the following that this series has.