Well, a  touch delayed because of the sheer excellence of the Fighting post, here’s this week’s installment of worthwhile (i.e. non-tween) Vampire films. This time up, I’m doing the grotesquely overlooked and extremely hard to get hold of sequel to arguably the definitive Vampire flick of the 80’s. Welcome to Fright Night Part 2: Electric Boogaloo.Only kidding, It’s not really called that. That would be daft. Unlike, say, bringing in a sibling performance-artist vampire with a ludicrous entourage and a laughable plan. That’s clearly sensible. This time out, in a virtual retread of the first film, Charlie Brewster and Peter Vincent are being tormented by Regine Dandridge and her rollerskating tranny vamp, horny werewolf, and weird bug eating butler dude.

It doesn’t open promisingly. Charlie is now in therapy at college and has managed to convince himself that Dandridge was an ordinary serial killer. His new girlfriend, Alex, is remarkably tolerant of his foibles and he seems to be on the way to becoming a thoroughly well-balanced young man. Meanwhile Vincent has lost his marbles completely and keeps going off script on Fright Night.

Into this unpromising scenario strolls Julie Carmen’s Regine. She is, to begin with, utterly boner inducing, and she’s also got an evil plan for vengeance: She’s going to kill Vincent and infect Charlie so that she can spend eternity torturing him without ever allowing him the sweet relief of death. I have to admit, that as vengeance plans go, this is a pretty shitty one. There’s endless scope for failure and it relies on far too many different aspects going to plan.

Carnage ensues, Vincent hilariously gets fired from Fright Night before being sectioned for his own good, before an epic and truly inventive final battle where Vincent shows his mettle dispatching Regine with a piece of broken mirror. This is all good Vampiric stuff, even if it does feel a bit like you’ve seen it before. Which is easily explained, because you have seen it before: in the first fucking film. 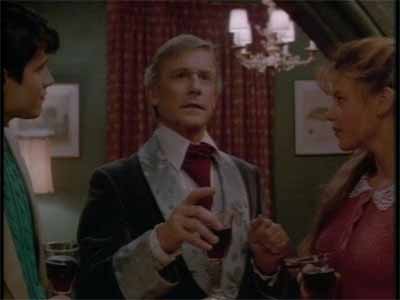 It all sounds like a bit of a mess, and there’s no denying that there is no way at all that Fright Night Part 2 qualifies as a horror film. It just isn’t scary. However, it does work as a comedy, being as much of it is genuinely funny, and this is down to the acting. McDowell is simply excellent as the cowardly Vincent(particularly the asylum scene), Ragsdale is functional as Charlie, and Lin is superb as Alex. Amongst the support, Gries is great as Louie but the real star of the show is Carmen as Regine. She’s great, flipping between wonderful sensuality and flat-out vampiric psychopathy. It’s a great turn as the villain, even if it isn’t as good as Sarandon was in the original. 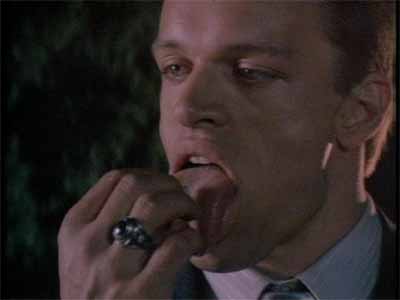 There are also, and I hate to say this, serious flaws to this film. Much of it is fragmented garbage, and there are myriad weird subplots and characters that just don’t work. A prime example is the roller skating tranny vampire. What the fuck? But other examples include that Regine is a performance artist masquerading as a vampire. This means that we are treated to 2 sequences of a gyrating Regine (not the worst thing to watch for a few minutes) that are both bizarre and a tad laughable. The second, when she has replaced Vincent as the host of Fright Night, is completely OTT and ridiculous. What the fuck were they thinking of?

Nevertheless, Fright Night 2 is an amusing film. There are many great lines in the script (Vincent gets most of them) and Alex’s constant protestations that Charlie is a retard hooked on melodrama ring dangerously true. Furthermore, there are also lots of nice touches (Regine doesn’t bite Charley, merely uses a fang to lift the scab off a cut he already has) that are a bit wasted in an obvious comedy, and the gore effects (particularly the bugs pouring out of Louie) are superb, even managing to top those in the first film. The thing about the effects, though, is that they are a bit wasted- in that by the time we get to see the show-stoppers (and they are good) the film is already encamped as a zany comedy.

Overall, would I recommend Fright Night Part 2? I have to say I would. It’s good vampiric fun and works well with its much more esteemed predecessor in a double bill. The problems with it are very easy to get over, and it is great fun. Carmen in particular should have got more work, and it is a real pity that Lin retired shortly after this film. At the end of the day, the pros to this film outweigh the cons by a huge amount and a Fright Night double bill could in no way be considered a waste of an evening.

Fright Night Part 2: not as good as the original, but still cracking fun. I give it 3 Changs, but with the proviso that this was watched as part of a double bill.

Twilight’s release date is coming fast, so I’ve only got a few of these left to do. I may continue it, if I can’t think of a better theme, but this is nearly the end.