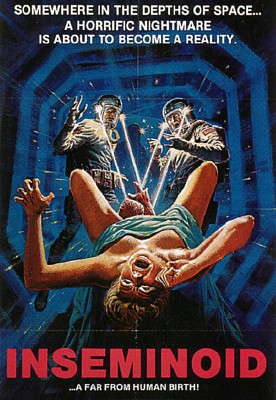 For the third and final Waste Of Space I’m turning to Brit exploitation helmer Norman J. Warren (always good to have an initial in there, makes one appear somehow more distinguished – yeh, not you, Paul W S). Brace yourself, it’s the nasty alien rape-fest Inseminoid, aka Horror Planet…

The plot concerns a scientific gig on an inhospitable (what else?) planet which has unearthed a realm of shadowy caverns during an archaeological dig. When they discover a pile of weird glowing crystals, two guys get waylaid by an unseen force and set in motion a chain of events which will unleash a very angry pregnant woman. As someone succinctly remarks – “That’ll look great in the report; team were terrorised by an expectant mother.” This isn’t yer usual run of the mill angry pregnant woman, for she has been possessed by an alien power, apparently communicating with her via those pesky crystals. From here on, the ever-expanding Sandy becomes increasingly demented, stalking her terrified team mates around the underground base’s network of rock tunnels while her accelerated pregnancy draws toward a messy conclusion.

Alien had yet to be released in the UK when Warren shot Inseminoid and he claimed to know nothing of Scott’s seminal classic at all. Bollocks, surely. Warren insists he took Inseminoid to 20th Century Fox and received their blessing when they saw his film bore little resemblance to Alien. In all likelihood, Fox, galvanised by the advance hype surrounding Inseminoid’s alien birth sequence, ‘requested’ a screening to establish if major sue-age was necessary. I mean, why would you bother to set up a screening if no one from Fox had contacted you, plus you had no foreknowledge of Alien in the first place? Pull the other one, Norman.

Ironically, having said all that and out of the three movies I’ve mangled in this series, Inseminoid is probably the least likely to qualify as a rip-off. But I do think Warren has at the very least tried to parody Alien, or even subvert Scott’s film. For a start, the creature can’t even be arsed stalking them. It is seen only twice (just as well; it’s a big toad with a turd on its head), the blink and you’ll miss it attack on Mitch (Trevor Thomas) and during a fantasy sequence. Then you’ve got what I shall term ‘The Reverse-Ripley Effect; female empowerment does a runner – they’re either hopelessly weak or they simply give up (don’t worry girls, when the going gets tough the blokes are a bunch of nancy-sized puffs as well). There are two ‘Ripley’ characters; one of them, Holly (Jennifer Ashley) is a red herring cos she’s in charge and turns out to be about as much use as a seagull in a Volvo. The smart money is on Kate (Stephanie Beacham). She makes sensible suggestions, plus she strips down to her vest and knickers. However, all hope is lost when we get to see her fight; she’s rubbish. She’s well posh though; when they ask her if she’s got any ideas, Kate blurts – “Exclusives!” Uh-huh, a hard hitting print campaign just might demoralise Sandy. It was years before this Northern monkey worked out she was saying “explosives”. Most of all, and this is quite witty if deliberate, is dismantling the legendary tag line ‘In space no one can hear you scream’. When Sandy (Judy Geeson) screams you will hear her, even in a vacuum. Smart one, Norman.

Much has been made of Inseminoid’s rape sequence, words such as “vile” and “abhorrent”, director Warren was labelled a “misogynist”. Odd then that Sandy’s rape by alien is not in the movie. Yeh, you heard me right. You don’t see it. What you do see is Sandy’s fractured mind trying to process the trauma. She’s muddling medical treatment (doctor, table, syringe) with alien interference (creature, ‘semen’). Not shown but certainly a possibility is that the alien tried to get jiggy with the two guys, Ricky (David Baxt) and Dean (Dominic Jephcott). The result: one goes insane, the other cataleptic. Incompatible bits, see. With the marks found on Sandy and Ricky (I’ll assume Dean also) I figured the alien ‘stung’ them in some way as the preferred method of (hence the clunky title) insemination. But Sandy has blocked out the reality in favour of fantasy; she was never naked, neither was there ever a tube of ‘egg yoke in pea soup’ shoved up her doodah (you’ll know what I mean if you see it). Her subconscious has responded to the telltale hormonal changes within her body to create this hypnagogic episode. Well, what’s the alternative? Turdy The Toad has got himself a snazzy lab tucked away in them thar caverns somewhere? Sod off, not having that.

Judy Geeson. She was your go-to-girl if you needed a bland wife or girlfriend part. She’s got no right being anywhere near this kind of stuff. There are times when she looks all at sea with the material (as do most of them) but she digs in and blows her squeaky-clean image out of orbit. She really puts in a shift. The birth scene is gruelling – and this is what the critics are really referring to, I reckon. It’s one of those where your finger hovers over the volume control button, worried the neighbours might think you’re tuned into violent snuff porn or something. Where she goes in her head to find these harrowing, agonised shrieks I don’t know. To achieve the correct timbre, I should think Judy was chain-smoking cigs or chugging back the Ardbeg. Or both. She gives Sandy an arc, displaying remorse when she first kills, trying to keep folk away for their own safety. She pleads for help though she can no longer control the alien instinct growing strong inside her and these pleas eventually turn insidious – as a lure to draw out her prey. 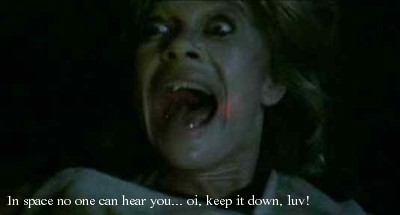 Inseminoid gets hopelessly derailed by the slapstick decision making asked of the characters. For example, sending Sandy and Mitch back into the caverns despite the tragedy that has befallen the mission. I mean, you’ve got a sample of the crystals; call it quits and get the fuck out of Dodge. This one’s a belter though; Gail (Rosalind Lloyd) takes a tumble outside the airlock and gets her foot stuck. No matter how many close-ups are employed of her hand ineffectually tugging at the offending boot, none convince that she’s trapped – just stand up and lift your foot out, girlfriend. She then discovers her suit thermostat has conked. This is a cause for concern as it’s something like, what, -90C outside. Gary (Stephen Grives), in the Ops room, tells her to “connect the blue and yellow leads” in her wrist control gizmo, this will bypass the thermostat and save her life. She musters a feeble attempt then announces “I can’t do it!” Her solution? Well, most of us would just connect the fucking wires but Gail – up here for thinking, down there for dancing – she opens the faceplate, disconnects the air tube, sticks it in her mouth and tries to saw her own foot off with a pair of hedge trimmers. Yeh, that’ll work.

There’s another riotous moment with the doctor, Karl (Barry Houghton – he’s like a lankier Ian Holm) trying to sedate a rampant Sandy. There’s only one of her; why don’t they all go? She’s not gonna overpower everybody. Instead he’s lumbered with Sharon (Heather Wright), who just goes around comforting everyone saying “It’s all right…” when it quite patently isn’t, and also the most unconvincing ‘Commander’ I’ve ever seen put on film, Holly. Whoever put bungalow head in charge needs slapping with a wet halibut. Worse, she finds herself a weapon, a ‘touch-burner’ (actually a cool bit of kit) and it does exactly what it says on the tin. Sandy predictably kicks off, pushes Sharon away (who was trying to stroke Sandy’s head while saying “It’s all right…”) and this leaves Karl stuck between an angry pregnant woman exhibiting alien super-strength and an employee of Billy Smart’s Circus, waving a potentially lethal implement around his head. All this numpty has to do is step past Karl and give Sandy a zap. So, idiot with a burner behind him, alien super-strength forcing him back. Can you guess what happens next?

Anyway, it falls on Sandy’s lover-boy, Mark (Robin Clarke) to try and save the day. Can he, though? The plonker gets into a scrap with Sandy, she only bites his leg and he passes out! Wimp. He’s got one of the funniest comedy runs ever witnessed, it’s like something out of Monty Python’s Flying Circus. And there’s a golden moment in Ops when he throws a tantrum, only there’s something amiss on the soundtrack – you can see he’s proper furious, shouting and shit but all that comes out is a ‘sneeze’. Actually, there’s another one of those near the start with Karl trying to stop Ricky going through the airlock (while Sharon is stroking his head and saying “It’s all right…”). You can see Karl’s lips form a word but all you hear is “Hmmm?” Well, I think it’s funny anyway.

But overall is it any good? Bluntly, no. It tries, there are moments when it buzzes around the level of average before opting to land on shite. I’m thinking particularly of the hilariously naff toy train chase, rudely gatecrashed by that cretbox Holly. Chiselhurst Caves is an effective location (when I watch Day Of The Dead I’m always reminded of Inseminoid) and cinematographer John Metcalfe finds a few atmospheric shots, with the aid of light piercing swirling dust and coloured glows. Unfortunately, John Scott’s synth noodling rarely backs him up. The fight choreography is laughable – there’s one bit with Sandy supposedly smashing Barbra’s (Victoria Tennant) face against a sink but she’s only rocking her back and forth! Same again, Sandy on Kate – terrible. The cast have been shown the moves, then left to flounder. There’s one very nasty moment, when Gary stamps on Sandy’s belly to stop her attack – then he does it a second time, with a really sadistic look on his face. I know she’s alien infested but that’s raw, I find it uncomfortable to watch. Other than that you’ll like Gary, he’s a dry sort and actor Grives seems at ease in the role.

Zero budget, and when that ran out before filming ended, Warren was down to shooting overhead angles to disguise the fact that there was no set or simply hang black sheets around what he did have. But no amount of money is going to turn a pencil-tidy holder into an object of the future and a motorcycle helmet is still a motorcycle helmet no matter how many empty yoghurt pots you glue on it (in the movie’s coda they give up even trying to pretend it’s a space helmet). Unlucky, Norman.

Next time I show up it’ll be with Xtro – yeh, more violent alien birth…