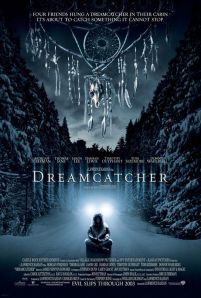 Dreamcatcher? More like Nightmarepitcher! You see what I did there, took the name and… oh fuck it. I started this series off saying that I would not go easy on the bad ones and instead of writing up Stand By Me I decided I’ll make good with my promise with this festering Don Murphy (turd). Dreamcatcher is a movie that has no fucking idea what it wants to be. Is it a coming of age tale? An alien horror? A study of accents? Or, an account of the digestive problems of old women? I don’t know and this movie sure as fuck doesn’t either. This movie jumps around more than a season of Quantum Leap. And what we are left with is an exercise in failure.

"To the ceiling, for refusing to back down to the wall, that arrogant prick."

While I did enjoy parts of the book it was nowhere near one of my favorites, but what good the book had is completely wiped off the face of the earth in this flick. The movie starts off giving us a group of 4 friends. Jonsey, Henry, Pete, and Beaver. You read that right, Beaver. Gee thanks for naming me after vagina, mom and dad.  and their magic retard, Duddits. Duddits has telepathic powers and is able to shoot dreamcatchers out of his head just like every other retarded person can, which is a known fact, look it up.  So far so good.  These 4 pals end up on a hunting trip that will ‘buck’ up their lives forever. Pun fully intended. These scenes in the movie actually gave me hope that this movie could be decent. The movie is actually quite beautiful, the setting of the snow shrouded cabin. The shots of the animals running through the forest. All pretty foreboding. But then comes Farts Mcgee to ruin the day.

Farts is a fat dude they find outside. He’s sick and covered in some kind of red moss. But his biggest problem is of the intestinal variety. The movie has this fat guy in skin tight footie pajamas and he’s constantly farting and the movie plays this dead serious. I remember sitting in the theater and the 3 other people in the room were cracking up laughing while I am slumping down in my seat, the dawning realization is that the next hour and a half of my life aren’t ever coming back. So Farts gets to the toilet and we are witness to the birth of the ‘Shit Weasel”. I only wish I made that name up but that’s what they call it in the movie. This thing looks like a slug mixed with vagina dentata. It kills The Beav and then a giant grey alien appears to Jonesy and then explodes into a cloud of red dust. Exactly what I was expecting to happen. 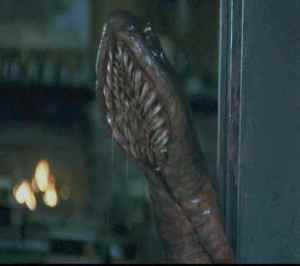 Imagine this showing up on your colonoscopy

The alien “Mr. Grey” takes over Jonsey’s body and this causes him to speak with an English Accent because aliens that burst out of your asshole are the most sophisticated of the space traveling community. Meanwhile one of the shit weasels kills Pete for no reason other to dwindle down the story and we are left with Tony Blair: Asshole Invader to serve us as our main story. Over on the other side of the movie, we get Henry being put into a quarantine situation, by the evil Morgan Freeman. Yep Morgan “March of the Penguins” Freeman is the main villian of this movie, Col. Kurtz (yeah because this movie is so much like Apocolypse Now). Also Tom Sizemore took time off from drugs and domestic violence to add nothing to this film. I think that Kurtz is supposedly a Col. who has dealt with aliens before under the Govt. So his major plan of action is to send jet fighters to shoot the aliens, just like any red-blooded, blue collar american can and should do. Provoke the aliens that live in your ass, good job Red, White, and Blue.

Henry escapes from the camp and goes to find Duddits (who is now afflicted by cancer but stays strong due to his love of Scooby Doo). And together they are off on an adventure to find Mr. Grey. They end up at a water treatment plant where the aliens have plotted to lay their eggs in the plant thus spreading their race of rim job loving Pussy-Mouths unto an unexpecting populace. Somehow Kurtz tracks them down and tries to kill them. Not the aliens mind you, but the people trying to save the fucking planet. Mr Grey then shows his true form which is a bigger version of the Shit Weasel. All looks like it is lost until Duddits yells “I Duddits!” and for no good reason except to let down the audience, turns into an alien himself. He covers himself and Mr. Grey in web of failure and they implode. What the hell is the point of having him turn out to be an alien? Isn’t supernatural retard enough for this movie? It was for the book because Duddits just died from cancer instead of  turning into an alien. I think the movie just wanted to show us that yet again Donnie Walburg can lose weight to have a less than staring role in a motion picture. But oh what’s this? One alien egg survived and is getting ever so close to the open water hatch! What the fuck is going to happen?!?!?! Jonsey steps on it and then the credits roll over a shot of all the friends together. Even the dead ones.

Showing us his career, Donnie points to a toilet

This movie gave me a headache. There was no way this should have ever been made into a movie. It works so much better on the page than it does trying to create atmosphere in a cloud of flatulance. And it just doesn’t make any goddamn sense. There are aliens, I mean a bryus spore that is also buttblasting weasel that can turn into a grey alien, lay eggs, and sound like Hugh Grant. Also retarded people are actually aliens that are able to get cancer but rise to the occasion when needed to find your keys or kill themselves with a net of skin goo. Although I’ve been harsh this movie is funny as hell just in how bad it’s all executed. But instead of watching this do yourself a favor and just drink a bottle of hot sauce, eat 3 day old chinese, and buy the cheapest brand of toilet paper you can find. It’ll recreate the experience for you. Until next time, Keep Watching the Special Olympics!

"Oh Jesus Heidi Pratt, your face makes me want to puke up my fecal matter!"