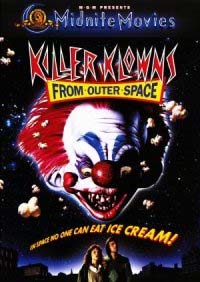 Sometimes schlocky films make me despair, and other times the makers manage to completely mislay their medication and produce something gleefully insane, unexpectedly amusing and totally enjoyable. Killer Klowns is one of the latter, and I’m glad it arrived this week as I’ve got 2 reviews of Murph worthy dogshit to do that I can’t face.

I’d like to know the story behind this film. I reckon that the Chiodo brothers were watching TV one afternoon, maybe smoking a few spliffs, maybe chewing on some mushrooms, and one of them said “you know, Clowns really scare me” to which another replied “nah, you’re nuts. Aliens are scary” to be followed by the third with “Well what about alien clowns?”. My reasoning is that this film seems to be the obvious result of massive narcotic consumption, and I would love to hear how they managed to persuade some blithering numpty to stump up $2m for it. 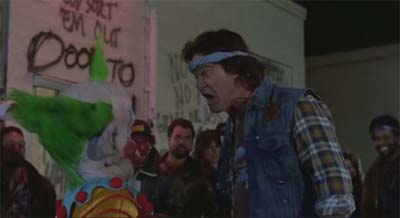 Killer Klowns is a gleefully anarchic mess of a film. It has a bit of gore, but I can’t honestly believe it was played as a horror film. If it is a horror film, then it’s a staggeringly unsuccessful one. However, having said that, the film has its tongue wedged deeply in its cheek, so I think it must have been played for laughs, and it is funny. There are several hugely successful sight gags, the odd great line, and it has a pleasingly cheesy B-movie feel to it. Really, this is a great little film.

Killer Klowns takes place in a small town. 2 horny teenagers (Dave and Debbie) see a meteorite hit the Earth and so go to investigate. They find a circus tent with the internal dimensions of the Tardis and some homicidal clowns that shoot popcorn at them. The two teenagers manage to make it back to civilisation, and run straight to the cops, one of whom- Mike – was Debbie’s ex, to tell their story. One thing leads to another, homicidal Klowns attack the town, wrap all the population in Candyfloss, before the intrepid band manage to kill all the extra-terrestrial circus performers.

The acting is fine- with Snyder being amusing in a screamy-type role as Debbie. However, the reason I’m reviewing this is that the Klowns invading the local town scenes are absolutely hilarious. They are unrepentantly crass and gleefully fun. The various attacks include: Midget Klown punching a biker’s head off, Klown popping out of a pizza delivery box, group of Klowns standing under a window holding a circus-style net for catching jumpers, pie throwing, balloon dogs that actually work as sniffer dogs, a hilarious Punch and Judy show and so forth. I could actually go on and on about these scenes for a while, but they’re all funny and there’s a huge variety to the various clown-y murder techniques.

The Crimewatch reconstruction of what Droid did last weekend

The sets and other design are cheap and cheerful. Given that they waxed the whole budget extremely fast, the Chiodo brothers worked a minor miracle. All the sets, especially those on the spaceship/ Circus Tent, are all bright, kitschy, colourful and fun. Even if they do resemble 1980’s Dr. Who a touch. The other effects, particularly the Klown shadow puppet, are also well realised (even if deliberately unconvincing) and much more effective than they have any right to be.

There are other great sight gags- but I want to give a quick shout out to “Klownzilla”, one of the most stupendously stupid ideas that I’ve seen in a long time. A giant, indestructible angry Klown that Mike kills by stabbing it in its big red nose, after local idiots the Terenzi brothers crash an ice-cream truck into it. This is a storming idea, and fits into the anything is possible ethos that the film has.

I briefly touched on it above, but some of the dialogue is knowingly funny. The exchanges when Debbie is trying to convince Mike that the Klowns are real contain a huge amount of winks at the camera with lines such as “They’re clowns, they fire popcorn, what else did you expect” mixing in with earnest attempts to rationalise the insane. Or grumpy Officer Moony who believes that the whole town is playing some kind of joke on him, because they’re all assholes. Let me give you a clue, Moony, if you think everyone else is an asshole, you’re wrong. There’s only one, and he’s much closer to home. The Klowns themselves are silent, but manage to convey a limited range of expression from under the heavy masks through gestures and so forth. Not the easiest job in the world, but they did manage to give the main Klowns distinctive personalities.

Nevertheless, as much fun as it is, this is a flawed film. Not to whinge, but it does seem to run out of steam in the last third (before Klownzilla), a few of the characters are a bit annoying and there’s a severe absence of gore and nudity. Neither of these things should be completely essential, but for some inexplicable reason there’s a scene with Debbie being terrorised in the shower. If you must include a shower scene (and it’s a completely gratuitous sequence) in a schlock film, then you must include some skin. Otherwise it is pointless as well as gratuitous.

Overall, would I recommend Killer Klowns? Absolutely. If anything, this is potentially one of the most epic drunk/ stoned films that I’ve seen in a long time. The reason it’s got a relatively low score is that I was completely sober when I saw it and therefore totally aware of flaws and suchlike. If I’d been a bit intoxicated then I am nearly certain I’d have enjoyed it even more.

I haven’t said this in a while, but get some beer, put this on and laugh at the clownish antics. Killer Klowns is loads of fun, a light-hearted, superficial gigglefest of a film, and there’s nothing wrong with that.

Oh, and don’t fuck the sequel up, guys. This film is light fun, I do not want to see the inner-angst of Klownzilla. I don’t want to see him crying because his father never laughed at his pie in pants based antics. Keep them originless and insane.