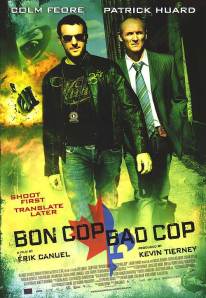 Though it technically isn’t French I’ll give Bon Cop, Bad Cop the benefit of the doubt (and the fact that half the movie is in French) and say “HOT DAMN! FUCK! Even the French know how to make a good buddy cop movie!”


Bon Cop, Bad Cop is a very generic, very formulaic buddy cop movie, but that does not matter this movie was a blast from start to finish. Knowing that buddy cop films are the third most important genre (behind Good Science Fiction and man on a mission films) it is great to see a different country tackle this highly coveted genre and succeed, the genre is all about fun and believability between the partnership and this movie fully realizes both.


This is in no way some ground breaking material, if anything it is one of the stalest pieces of shit contrived story I’ve ever seen, but it fucking works and it is magical. There is nothing new story wise here, and there is every cliché under the sun in this thing, but I think that is part of the fun. Buddy cop movies are meant to be fun and that is what this is. Maybe had this been a straight up American film I would not be so pleased with it, but having that French Canadian twist gave it something more.

Boy we are really going to be at odds with each other aren't we?

Now I don’t know much about Canadia except that they have good health care and Mounties, but I guess there is some giant rivalry between English Canadia and French Canadia? While either way that is what this movie is all about and that is where a lot of the comedy comes into play. The movie starts off with a dead body on top of a sign that is on the boarder between French Canadia Québec and English Canadia Ontario. The rough around the edges doesn’t follow the rules cop David Bouchard (Patrick Huard) comes from Québec and the hard nose by the book cop Martin Ward (Colm Feore) comes from Ontario. They are at odds from the get go causing them to rip the body in half.


Their chiefs feel that it would be a good thing for both departments if they became partners for this case, and of course they resist. Before you can compare the plot devices to fifty other Buddy Cop movies you have seen this movie has already moved on, that is another one of its strengths is that is does not linger or over stay it’s welcome. It knows its exact place in the universe of movies.


The killings in this movie are of a bunch of Hockey high ranking officials, a hockey team is being sold to America and people are not happy about that. Or could it be that a disgraced former Hockey player is out for revenge? You will just have to watch and see for yourself. It’s a fun time the two leads are a blast and are obviously having a ball with these clichéd roles. The back and forth is a tried and true tradition of the Buddy Cop Genre and if the back and forth’s between the two leads is not fun and playful then they have missed the mark, this is not the case here. The movie bounces back and fourth between French and English very fast and if I hadn’t almost failed 2 years of French in high school I would do the same in my review. Luckily (much to Bouchard’s chagrin) Martin speaks fluent French as well as English, so when they are in Québec they only speak French and when they are in Ontario they only speak English.

WOW we sure are an unlikely pair.

Another aspect of this film that is a lot of fun is that these two cops are not giant ass kickers, they are not going to take on Jet Li and live to tell about it. They get their asses handed to them left and right but always come back for more. Also the style of the fights and action are well done and with early 90’s action flair.


The only part about the movie that I didn’t care for was Bouchard going banging a chick (yes it turns out to be Martin sister, like I said this movie is not about originality) because yes he had divorced from him wife yet they were living together and he wanted to make things better but he is a known cheater. It just cheapens his character especially when his daughter becomes a victim. It was obviously intended for the gratuitous boob shot, because I don’t think anyone wanted to see Colm Feore getting it on.


So if you are looking for just a solid good entertainment movie where you can tell everyone is having a blast and is a throw back to great early 90’s buddy cop movies then check this out. Also please enjoy the cliché of someone doing the “You talkin to me?” speech from Taxi Driver, but in a hokey mascot uniform.

Surprisingly enough this film was not produced by Luc Besson and was filmed in New York.