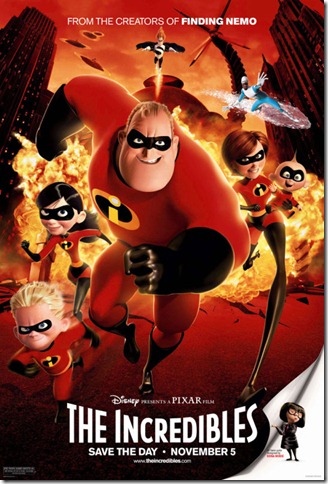 What can you say about Pixar except for the obvious? They’ve got a pretty impressive track record to say the least. The only film of theirs I didn’t particularly like was ‘Cars’. But ‘The Incredibles’ set a standard they’ve yet to surpass, despite making the delightful ‘Wall-E’. Not only is it ceaselessly enjoyable as an entertainment, it’s also a clever, sly commentary on society, an intelligent satire and a hilarious spoof all rolled in to one.

The look on his face is priceless.

What happens when a superhero saves someone that doesn’t want to be saved? He gets sued. That’s what happens to Bob Parr aka Mr Incredible (Craig T. Nelson), when he saves a man who tries to commit suicide. This triggers a chain of lawsuits brought against other superhero’s such as X-Ray Vision, Dynaguy and Gazerbeam. The government is forced to initiate the Superhero Relocation Program, sending the Supers into hiding. Fifteen years later, Mr Incredible, now married to Helen aka Elastigirl (Holly Hunter), has three kids and an office job he hates. He receives an invitation from the mysterious Mirage (Elizabeth Peña), who knows his true identity and needs his help. Mr Incredible accepts the invitation and gets involved in a plot by evil mastermind Syndrome (Jason Lee), who doesn’t have superpowers and worshipped him as a kid. Using a giant robot, Syndrome plans to stage an attack on Municiberg and fake the robots defeat to show the world that he is a superhero.

As I said, this film is hugely entertaining. Written and directed by Brad Bird, the amount of character detail jammed into the first 20 minutes, despite an action packed opening, is impressive. We get to know the characters of Mr Incredible, Elastigirl, Frozone (Samuel L. Jackson) and future villain Syndrome aka Incrediboy (“You’re not affiliated with me!”) in a matter of minutes. We know who they are, what their relationships are and the world that they exist in. In doing so, Bird allows himself the time and space to develop each of the characters, including the kids, Dash (Spencer Fox) who can run very, very fast, Violet (Sarah Vowell), who can makes herself invisible and generate force fields, and the baby Jack-Jack, who doesn’t have any powers. Yet. He’s also given himself time to develop Bob’s alienation from normal society (“They keep inventing ways to celebrate mediocrity!”) and frustration with a job he hates, sitting in a tiny cubicle at a giant insurance company where he is required to deny all claims. He misses the old days, when he was allowed to be his best, not sitting in his car with Frozone listening to a police scanner hoping to secretly help someone in trouble.

Funnily enough, this is how I work out too.

Suppressing his true desires, and compromising who he is, is making Bob miserable. When he accepts the invitation from Mirage, and successfully completes the first mission, he is reinvigorated with a new sense of purpose. It’s classic midlife crisis stuff. He starts working out again, he buys a sporty new car and he’s more passionate with his wife. It’s great writing, and to find these adult themes in what is meant to be a kids film is a pleasure. It’s a film that truly crosses the age barrier. Kids love it for the humour and the action, while adults get involved in the familiar themes and situations.

The performances are all top notch. Bird has subtly designed many of the characters so that they reflect the real actors, and this is instrumental to their believability. Nelson and Hunter in particular are terrific in creating real people that we can relate to. The performances help transcend the usual limitations of an animated film. We take these characters seriously, because the characters are true, recognisable humans, despite their fantastic abilities. Jason Lee is wonderful as well. Despite being very funny, Lee inflects real menace and jealousy into Syndrome, and his actions are the result of old wounds and long gestating feelings of betrayal.

Who hasn’t wanted to do this to their boss?

The action scenes are as good as you can get. Bird has staged them with perfect timing and even though this is an animated film, you still get the sense of danger that many live action films fail to generate. Despite their powers, these characters are vulnerable. A perfect example is the scene where Helen is flying the plane and the kids are on board. When they are fired upon by missiles, the panic and danger of their situation is real. It’s a better scene than most other action films have tried and failed to achieve.

What ‘The Incredibles’ also manages to pull off is being a spoof of action films. In particular, James Bond. The villain, with his secret, tropical island lair, his hoard of useless minions and his penchant for explaining his entire plan for world domination at inopportune times (“You sly dog, you nearly caught me monologuing!”). The tech genius Edna Mode aka E (Brad Bird), who supplies our heroes with specially designed suits (“Virtually indestructible, yet it breathes like Egyptian cotton.”). The film is very funny, and it’s a credit to the clever writing that it doesn’t simply resort to sight gags. It’s cleverness and understanding of the genre it’s spoofing can be found in the scene where E explains to Mr Incredible why his new suit shouldn’t have a cape. While aesthetically pleasing, a cape just isn’t practical. Just ask Splashdown. Oh, but you can’t. He was sucked into a vortex.

Bomb Voyage. What a great character.

The film is gorgeous to look at. The tropical island, with its dense rainforest and active volcano is spectacular. The shot of the plane coming in for landing, and gliding under the water into the underground hanger is beautiful. The design of the film, from the characters to the architecture, is very slightly exaggerated to give it a unique look, but not so much that we lose recognition and the reality.

When most animated films are simply happy to look cute and reference popular culture, The Incredibles and Pixar in general are something special. They don’t dumb down the story because it’s a kids film. It respects a childs ability to understand that there is something more to the story than a cute furry animal with huge eyes who knows kung-fu. Just like ‘Wall-E’, it has the confidence in it’s story and it’s characters, and the result is a wonderful film that deserves repeat viewing and I believe will endure where the likes of Shrek or Ice Age will fade. It’s a brilliant film. 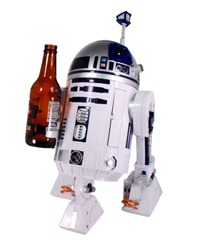