Jarv’s Rating: 1.5 Changs. Reasonably enjoyable stupid violent fun, but at the end of the day it’s heavily flawed and kind of shit.

Well, after the crushing disappointment that was Splice, I wasn’t feeling all that great about watching anything in particular, especially not anything that was released in the summer. However, at the same time, I’m busy watching as many vampire films as I can stomach in the hope of unearthing some that aren’t completely terrible and preferably nothing like the romance driven soppy vampiric drivel that plague the genre nowadays. Except, now that I’ve watched it I have to say that this isn’t  a vampire film.

The thing is, I know it’s got “Vampire” in the subtitle, but really, that’s a misrepresentation. I’m getting a bit sick of this, to be honest. If I purchased some food and bought a tin with “beans” written on the front, then opened it to find that it actually had tuna inside then I’d be a bit pissed off- and this is happening all the time with films. Splice, for example, is clearly being sold as some kind of cerebral Species, when it’s nothing of the sort. Or Black Snake Moan being sold as sexploitation when it’s nothing of the sort. Or Tarantino movies being sold as actual films rather than the cinematic onanism that they actually are. Anyway, you get the drift. It’s dishonest. At no point in the film Blood is the word “vampire” even mentioned. Demons are, and “old ones” quite frequently, but not “vampire”. Also, they can go about in daylight, don’t have any vampiric weaknesses, don’t really have a blood dependency and so on and so forth. These aren’t vampires. Also on this note, there’s no blood in the film- despite what the tagline says. There’s plenty of CGI squib’s bursting and showering red stuff everywhere, but it isn’t blood.

Nevertheless, they are demons, and therefore quite eligible for a small Korean woman (I know she’s meant to be Japanese, but she’s Korean) to cut them in half with a ridiculously big sword, so that’s all right then. There are also samurai, ninjas, secret societies, good actors paying the mortgage and stupid Americans so really, I can cope with the lack of vampire action.

Blood: The Last Vampire follows the adventures of Saya(Gianna) in her quest to eliminate all the demons- particularly the oldest one, an uber-bitch with head popping powers called Onegin. For reasons too confusing to think about she has to go undercover at an American Base, and much head chopping fun ensues. She also gets an annoying American sidekick (Alison Miller) who adds nothing to the story, but traipses around after her generally getting in the way. The film trundles along quite happily interspersing flashbacks with the action before climaxing with the inevitable showdown between Saya and Onegin.

This is not, and this isn’t going to come as a massive shock, a particularly good or even noteworthy film. The writing in this is pretty bad, but there are plenty of unintended chuckles to be had- particularly in the Darth Vader moment between Saya and Onegin-

“You kill my father”

“Child where do you think you get you’re strength from? Me, I am your mother”

Obviously, I’ve paraphrased that, but you get the idea. Which reminds, me Onegin in the final face off resembles an end of game boss from Final Fantasy- being suspended 10 feet in the air with ribbons around her. This is not a good thing.

Gianna is ok-ish as Saya, but if I’m honest, after her stunning turn in Daisy, a bit of a disappointment. Oh and don’t call yourself “Gianna”, love, your name is Ji-hyun Jun- don’t pander to us ignorant westerners. Alison Miller sucks ass as the sidekick, being at least 7 years too old for the part and having the screen presence of a small root vegetable. Other than that, there are numerous British thesps begging for a paycheck (Liam Cunningham and Colin Salmon), Japanese actors who should know better, but the acting overall is alright without being spectacular. 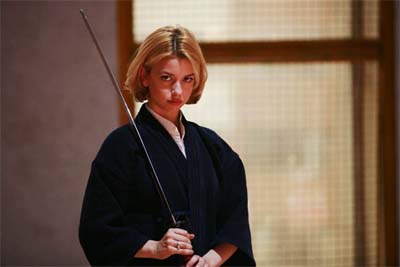 Then there’s the action. This is a bit of a fuckup, to be honest. It’s like Chris Nahon watched 300 and thought, it was OK, but clearly needed a bit more slo-mo. The fights themselves (particularly the ninjas in the wood) are choreographed well, and it’s good fun, however, the climactic battle is as damp a squib as damp squibs go. Furthermore, I’m starting to come round to Koutch’s thinking on this one, but CGI blood is a fucking plague and needs retiring. There’s no practical blood at all in this, but fountains and fountains of ridiculously fake looking CGI blood. Still, it’s hard to complain when demons are getting split down the middle by a Japanese schoolgirl.

Which brings me on to the effects generally. Which are shit. The demon transformations are pretty lousy really, and there are numerous fucking laughable demon effects in it. There’s one sequence in particular where Colin Salmon’s demon form is running along the side of a building that just redefines terrible. If you can’t do CGI properly, don’t do CGI.

Nevertheless, despite all of the above, it manages to be quite good fun. Ninjas and demons are intrinsically entertaining, as are 25-year-old Japanese schoolgirls, and it is really surprisingly enjoyable watching them get chopped up. It’s a thoroughly ridiculous premise, and they try to be incredibly serious with it, so the whole farrago is just kind of funny. Much to my amazement, I found myself enjoying something that I was all prepared to hate.

Overall, would I recommend it? Maybe. Add some beer, and this is a potential winner, but the ridiculous CGI blood is far too excessive and it’s a bit of a soulless experience. It’s not the worst thing I’ve seen recently, but it hasn’t exactly fucked my eyeballs either.