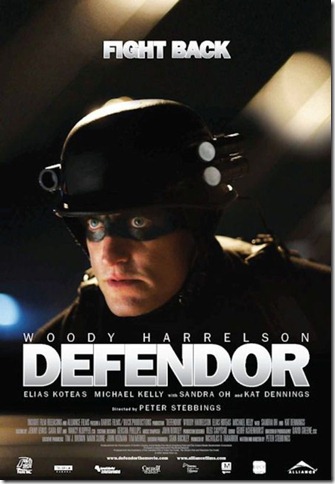 Bloody hell that headlines a terrible pun. But what the hell.

What a six months it’s been for Woody Harrelson. Since October he’s been in the very enjoyable ‘Zombieland’, alongside our very own Emma Stone-Zombieland, managed to not only come out of ‘2012’ unscathed, but to actually be the only good thing about it, earned a well deserved Oscar nomination for his performance as a Casualty Notification officer in ‘The Messenger’, and now he stars as the mentally challenged superhero ‘Defendor’.

By day, Arthur Poppington (Harrelson) is a City Works labourer. He holds that sign that says Stop on one side and Slow on the other. By night, Arthur becomes Defendor, seeking revenge against Captain Industry, the supervillain that killed his mother. One night when he confronts a group of thugs, including the dirty cop Chuck Dooney (Elias Koteas), he is on the receiving end of an ass whooping. Local prostitute Kat (Kat Dennings) comes to his aid and a friendship is born. She tells Arthur that she knows who Captain Industry is, and helps him take him down.

There’s a lot going on in ‘Defendor, and writer/director Peter Stebbings does a terrific job of balancing the film. He manages to maintain the delicate balance between drama and comedy. One aspect of the film is that it’s a satire/homage to superhero films, and there are times when the music touches on the famous Superman theme. Comic books are prevalent in Arthurs life, from his earliest memories, and the obvious model for that character of Defendor is Batman, complete with black make-up across the eyes and the growling voice. But it’s not just a riff on superhero films. Arthur is mentally challenged. He’s not exactly severely handicapped, but he doesn’t quite grasp reality. He is shaped by his childhood, with what happened to his mother and also his Grandfather who raised him from an early age when she left.

Woody Harrelson is terrific as Arthur. He has an openness that draws you in to the character, and makes you sympathise with him immediately. It’s a role that could have been played for laughs, but Harrelson grounds the film and makes it less about the joke, and more about the danger of a somewhat delusional man dressing up as a superhero and fighting criminals. Kat Dennings is also good in what is admittedly a bit of a cliché role, the hooker with the heart of gold. But there’s a bit more to the character than just that and she gives a good performance. Koteas is suitably slimy and hateful as the crooked cop, but the character is a bit underwritten to be honest. And Michael Kelly as Arthurs boss and friend Paul Carter is really great as he tries to protect Arthur from himself. You really believe that Paul cares for Arthur, and that he just wants to keep him safe.

My only quibble with the film is that I found myself questioning the portrayal of the police work. I never quite believed that it was an actual, functioning Police Department, and the investigation into the local crime lord seemed a bit unrealistic to my layman eyes. But it’s never something I found to be too detrimental to the film, because it’s less about the mechanics of the plot, and more about Arthur, and his relationships with Kat and Paul.

Credit also to Director of Photography David Greene. The film, made on a very modest budget, looks terrific. Made for around $4 million and shot in Canada, it could easily pass as a film five times the cost. It really does make you wonder where all the money goes on big budget films. Hookers and blow can only account for so much.

As with many unique, interesting films, ‘Defendor’ is of course being shafted upon distribution. I highly recommend you seek this out when you get the opportunity. It will definitely give you a Woody.