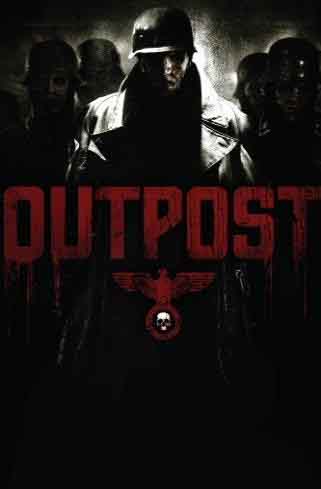 A pox on the fucking supermarket. How dare they put DVD’s of schlock for less than £3 next to the fucking checkout. Seriously, I’m a mug and this just sucks me in every time- I’m going to run out of shelf space at this rate. I’m going to either have to grow some self-restraint, or send Mrs. Jarv to do the shopping.

Nevertheless, Let’s look at the rules for low-budget horror: if in doubt add zombies. If still in doubt then add some Nazi’s too. It’s a formula that should always lead to good dirty fun.

The British film industry is a bit of a mess, to be honest. We make either dismal kitchen sink dramas that leave the audience suicidal, crap camp comedy that makes me cringe, or horror that tends to be about as scary as a fart in an elevator. There are a couple of films that stand out in each genre, but as a rule we tend to make utter shit. 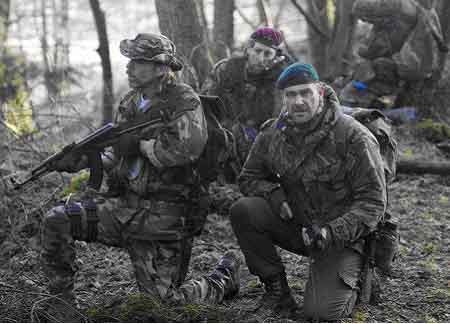 Outpost was made in 2008 and there are several reasons to watch it. First, it’s about zombie Nazi bastards (not Daily Mail readers, the real thing), and that is entertaining by definition, but secondly it’s got Ray Stevenson in it as a double hard mercenary bastard. He’s excellent as double hard bastards- Titus Pullo is almost a triple hard bastard, and Frank Castle (although psychotic) is clearly not someone to fuck with. Here, he plays DC a world-weary, bitter, burnt out mercenary, but he’s still double hard.

Plotwise, Outpost is simple. A nerdy type guy hires DC’s troop of mercenary bastards to guard him to a “valuable piece of real estate” in some war-torn shithole in Eastern Europe (that looks suspiciously like Britain). It turns out said real estate is a Nazi bunker where nefarious German movie scientists where fucking around with some bollocks theory to make invulnerable soldiers. Sure enough, undead Nazi bastards pitch up, and everyone dies messily. 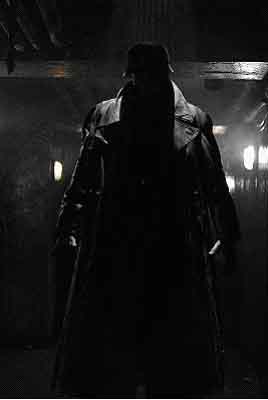 Steven Barker (one to watch in the future), the director has clearly both seen a lot of other films and also played a lot of video games. This film reeks of Carpenter- the undead Nazi bastards are most reminiscent of the undead leper bastards from The Fog. There’s a sequence in it when the mercenaries come under fire from the undead nazi bastards, and the lights flick on bright, a wind howls and you can only really see them in silhouette that comes straight from The Fog. It isn’t anywhere near as good as The Fog (or anything else that it robs from- Dog Soldiers for example) but Outpost is an object lesson in that if you’re going to steal from something make sure you steal from something good (I’m looking at you Cokey McFrankensteinhead, you fuck).

The script is reasonably entertaining- there’s a couple of genuinely good lines in it- mostly Ray gets them, but Prior (the redneck yank second in command) and Mckay gets a couple too. I particularly like the exchange where Prior snaps and shoots the obvious dead Nazi that they’ve been looking after:

Prior: [shoots the Breather in the head] Well, that worked.

Jordan: So we can kill them, right?

Prior: His brains are all over the wall. That’s good enough for me.

McKay: [the Breather sits up and looks at them] Oh, you’re hummin’ my balls!

Aside from the script, the performances are all reasonable. Ray is on good form as a double hard bastard, Julian Wadham is excellent as the sleazy nerd movie scientist (yes, this mess is all his fault), and Richard Brake’s slightly unhinged drawling Prior is great fun. Solid is the best way to describe the acting.

Overall, this is good entertaining stuff, and if you’ve got an interest in Horror, mercenaries, zombies, John Carpenter films or Nazi bastards then you’ll enjoy it. It’s certainly the most promising genre debut from a Brit since Neil Marshall’s Dog Soldiers. It’s a great example of if you must steal, steal from the best, and I’m sure Carpenter appreciates the royalty cheques he must be getting for this. He probably spent all £20 of them on fried chicken and weed.

I can’t believe I’m saying this, but they made a sequel due out this year, and I’m really looking forward to it. It’s a simple premise, well executed and if they follow the formula the sequel will also be an entertaining horror film. It makes a very pleasant change from the utter crap masquerading as horror nowadays and I’m certainly keeping half an eye out for any forthcoming Barker films.