LEGION is a mess of Biblical proportions by herr milflover

You’d think a movie about a machine gun toting rebellious Angel trying to stop other Angels from bringing about the Biblical End of the World would make for some thrilling supernatural mayhem.

But you’d be thinking wrong.

The biggest sign of the Apocalypse that I saw in the two hours I sat in the theatre was the trailer for the upcoming comedy Hot Tub Time Machine. God that looks horrible, but I digress.

LEGION started with some promise. We are introduced to Paul Bettany’s fallen angel Michael as he is excising himself of his wings and sewing up the wounds. He then goes on a night time shopping spree for an arsenal of guns that he needs for the coming apocalypse. His actions bring about the attention of a passing cop car, and the ensuing standoff with the officers gave me hope that I was in for some good, mindless entertainment. 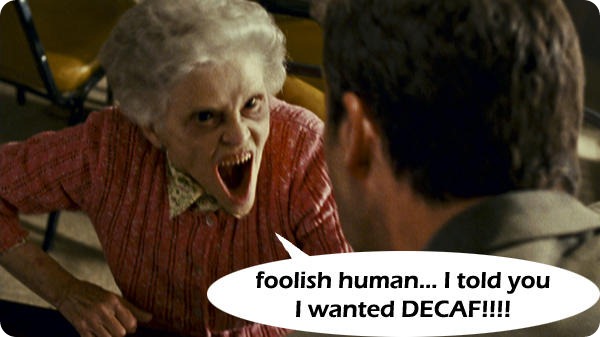 Unfortunately, that isn’t the case. The next scene takes us to the Paradise Falls Diner, situated quite literally in the middle of nowhere USA. There we are introduced to the rest of the cast of characters, getting to know a little bit about each of them for the next 20 or so minutes, in what I’m guessing is an attempt at characterization. A quick rundown: Dennis Quaid giving us his usual gruff, bitter demeanour; his emotionally stunted son Jeep (I shit you not, his name is Jeep); Charlie the pregnant waitress; Percy the hook-handed cook, played by Charles S. Dutton (no really, he has a hook hand!); a stranded dysfunctional bickering family waiting for their car to be fixed; and last -but certainly least- a randomly thrown in lost cliché black dude played with not an ounce of subtlety by Tyrese Gibson. Needless to say, the attempt at characterization fails miserably and almost grinds the movie to a halt, since none of them are in the slightest bit sympathetic, making it hard to care when they predictably start dying one by one.

Next, in comes a charming old lady who orders up a steak. Unsurprisingly (to those who saw the trailer anyway) it turns out that the old lady isn’t so charming after all. Channelling the best of Betty White from Lake Placid, she starts swearing up a storm at everyone and goes crazy, crawling on the ceiling like a rabid mutant spider, viciously beating the crap out of everybody in hilarious fashion, until they manage to kill her.
Alas, that’s pretty much when the good stuff ends.

Fallen angel finally Michael arrives on the scene to reveal the gist of the plot: God lost faith in humanity, and Charlie’s unborn child is mankind’s last hope of survival. The Diner is then attacked by various hordes of freaks and possessed pseudo-zombies, which is where Michael’s arsenal comes in handy, not that it is sufficient to get the job done. We are then treated to a rather tedious Dawn Of The Dead rip-off siege with the diner in lieu of a mall, which thankfully ends when the still faithful to God angel Gabriel swoops in to finish the Lord’s Work. I’ve basically summarized the whole plot right here and there are no real spoilers to speak of, because everything is as predictable as it can possibly be. A lot of shit happens, but we don’t really get explanations for any of it, beyond the aforementioned ‘God lost faith in humanity’. Can things be vague enough? Like, why in the hell is that baby so damn important for mankind’s sake? What’s the significance of those supposedly crucial tattooed writings on Michael’s body? Fuck if I could tell you. It’s like the story needed a few more rewrites that never came in, so they just shot the movie with a half-finished script, and everything just nosedives from there.

Sadly, the old lady scene was the best bit of fun to behold, other than maybe the big fight between Michael and Gabriel, but even that is too little too late. The special effects are adequate yet overall lacklustre, nothing that hasn’t been done better before. The Angels’ suits of armour are hardly impressive, they look like barely upgraded versions of what Affleck and Damon wore in Kevin Smith’s Dogma. And Dogma also had Salma Hayek in a bikini and a Shit Monster, so right there Legion is trumped.

I’d say director Scott Stewart did a good job behind the camera, since despite its numerous flaws the movie is at least watchable from a visual/action standpoint, but seeing how as a co-writer is he responsible for how wretched the script is, I wouldn’t want him to feel like he deserves any compliments.

Stewart also loses extra points because the acting is across the board awful. Paul Bettany doesn’t show any range beyond stoic to make us feel like he cares about humanity’s survival, and the rest of them don’t fare much better. Granted, they cant really accomplish much of anything given how dismal the dialogue is to begin with. Mary Walsh (of Grey’s Anatomy fame) probably gives the best performance of the bunch as the distressed mom, and Dutton is as serviceable as ever in a thankless role, which isn’t saying much really. However, a very dishonourable mention must go to Lucas Black, who has to be one of the worst actors I’ve seen in quite a while. There’s no way Jeep was intended to come across as so borderline retarded, yet Black manages to make Forrest Gump seem like a feisty genius by comparison.

With a fully fleshed out script and a better cast, there is little doubt that a more competent hand in the director’s chair could have taken that premise full of potential and given us a glorious piece of good old fashioned supernatural schlock. As it is, and especially on the heels of the excellent Daybreakers and Book Of Eli, Legion was merely a crushing and forgettable disappointment.